There are many teams that BC fields on various sporting fields, it's not just all about Football at BC, not by a long shot!

Here we're going to draft BC players past and current (going back let's say, 20 years) who never actually played football for the Eagles, but we wish they would have.

We'll list the player, his actual sport and position, then his football position for which we're drafting him. 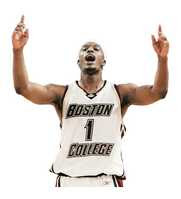 With the first overall selection, I'm going with Craig Smith here. The big man out hustled and out worked many in his time at The Heights and is one of my favorite all-time players basketball-wise at BC (and a super-nice dude to boot). The Cookie Monster has enough size and strength to seal an end, but enough pure athleticism and great hands allowing him to be a Red Zone terror. Go ahead, TRY to tell me you wouldn't have loved to have seen Craig Smith throw on the pads at TE for the Eagles, Wesley!!

When I think WR, or prototypical WR, I think Hang Time, and quick... fast isn't as important to me as quick.. you need that quick jump.. and to get open you need some air to out grab the D.. I think Tyrese could have had a calling to FB if only given a chance at BC... We should have had Matty Heisman (yes I call him that , although uncrowned) toss him a few passes to test this thought.. If we can get a kicker out of the stands, can't we get someone from another sport?

Curley was best known for his great hands and ability to shoot outside for a big man. Those great hands are going to come in handy along with his surprising agility as he protects the QB's blind-side. That 6'9" reach should keep just about every defensive end in the conference at bay.

HT: 6'2"
WT: 193
Former Position: Pitcher, Baseball
New Position: Quarterback
Haha.. I know what you are thinking.. we already have a Pitcher
turned QB..
Outside of having good size for playing QB, he also has the right mentality to do so. He knows how to win, and plays with a lot of heart. And whow wouldnt want a QB who also can play the piano?

Ha! That's an interesting call with Martinez. I think the jury is out. I will tell you in about four or five years if pitcher turned QB is a good call or not. On to my pick, Rakim Sanders...

Hey, if I told you we had an outstanding QB prospect who was unbelievably athletic, ridiculously chiseled, stood 6'5" and weighed in at 230lbs, you probably would think you had a five star QB recruit on your hands.

Anyone who has ever seen Rakim Sanders play basketball notices two things: A) He's one of the most athletic guys you've ever seen play basketball, and B) You wonder what he could do in pads. The guy simply has a football body.

Now, in all fairness, I don't know if Rakim can throw the ball worth a lick, but I do know I could run the option all day with him. Plus, we know he likes the physical contact, this might give him an opportunity to get it out of his system before basketball season (just a thought, Al). 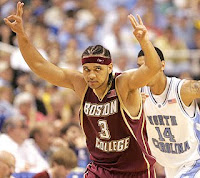 Think about this, everyone love the Wide Reciever that you can throw the fade route just inside the end zone to. Think Florida State's Greg Carr.

I will tell you right now , I would not enjoy covering him - at all!

Jared is not only tall, but he has good size on him to get those good fade routes, and out maneuver the D by getting good push offs. Although he has been successful at Basketball I truly feel like he coulda been a contenda' on the Gridirion

Nice call with Dudley there, Wesley. I'm sure Duds would get the opposing CB to commit numerous personal foul and interference penalties. Amazing how he was able to get underneath the opponent's skin.
HT: 5'5"
WT: 165lbs
Former Position: Forward, Hockey
New Position: TB

I'm not sure his frame would hold up to the beating of a full season of football, so I'm throwing the "tailback" tag on there instead of running back. Besides, the guy is a winner...that we are sure of.

In a perfect world, I'd be able to use Gerbe as a 3rd down back / slot receiver type. His speed and elusiveness would get by any of the guys who could actually see him coming behind the OL anchored by Curley. 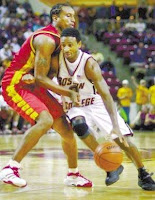 I am going to have to go with Troy Bell here; Boston College's leading scorer in Basketball.

Troy is going to give you no space here.. that five yard cushion isn't going to exist, and you are going to feel like you are shadowed. When I think of Tenacious D.. That is how I would envision Troy Bell on the field.

He always seems to know where the ball is, and where it is going next, so that should translate well onto the football field.

Okay, I know I'm cheating a little bit here, but hear me out.

People who follow BC football recruiting know that we're generally not winning the "star" races vs. programs like USC and Florida on a whole, but we do just fine for ourselves just the same.

It's important to note that BC *IS* the USC/Florida of Hockey, and gets more big time recruits than any other program. It is standard operating procedure for Jerry York to pull in one or two first round draft picks from the NHL to play at BC. Sure, it might take him a little while to adjust recruiting off the ice, but I have faith. 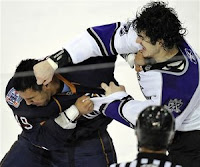 
Mike , As a big of cheat as that is, I have got to give you credit.. York has done a GREAT job with the hockey program!

On this choice we needed someone to bring a little heat off the edge...This picture sums it all up.. Would he not be a terror coming off the edge?

At 6 feet 7 inches he has the height to lay the wood and knock a QB into next week, or possibly even next month.