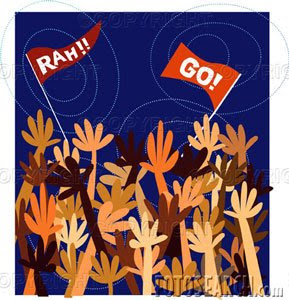 Today's topic comes from our loyal reader Kyle P. Have a suggestion for a topic for Mike and Wesley to draft? Please submit your ideas via email!!

Kyle writes in asking us to draft the best BC football plays of all time. What do you think, Wesley?

Wow, this is going to be a hard one .. How do you limit to just a few of BC's best plays ever? As I am certain that some plays will hold more in hearts than others.. here are the top 10 drafted by BCMike and Wesley, starting with me (Wesley). 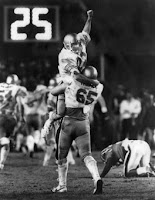 Mike, I would be an IDIOT if I didn't choose this as my first draft choice.
This play really helped put BC on the map.
I mean ... people look back, and remember where they were when this pass was thrown.. it truly was magical.
Mike do you remember who hiked that ball to Flutie?

While I realize it's still somewhat recent, I have to go with Matty Ice's defining moment at The Heights. I'm sad to say I wasn't there for this game at Lane Stadium (a trip I'm going on THIS year..and yes, I'll be wearing my Matty Ryan jersey in the stands), but I was at an Alumni Game Watch for this finish.

The mood was so sad, so slow, so defeated...until the last couple minutes of this game. I'll remember jumping up and throwing friends in the air as we celebrated this amazing win. Still gives me chills. 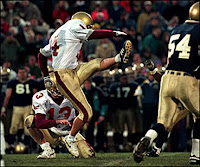 Wow Mike, you are really slipping here.. you are going to let me get away with both the flutie pass AND the kick against ND? It killed thier title hopes.. even though we didnt have a perfect season we really took the wind out of the Frauds sails with this one.


4M) Gonzo catch
I actually thought hard about this one, Wesley. For me, as much as I enjoy watching Notre Dame lose (and I really do), the VT game was one where OUR national title hopes were on the lines, not ND's. Both are great plays though, no doubt.

For this game I was actually in Illinois, near Illinois State University.

It was after their game, and I more or less insisted we find a bar to watch the game at. Now, this area is heavy with ND fans (since Illinois really stunk at the time, and ND is fairly close), so I was easily the only one in the bar rooting for the Eagles.

Back and forth, it looked like BC was going to (finally) lose to Notre Dame. Then Tony Gonzalez decided to seal ND's fate with a brilliant TD grab in the endzone to keep the streak vs. the Fake Irish alive.


5W) Clemson TD Pass 07
I was there for this one.. Wow.. what a year.. and what a game.
It was almost like Richie Gunns was uncovered.. we needed this win to go to the ACC championship.. and had just lost 2 in a row and it wasn't looking for us at this game as we come in as the underdog.. Just the way BC seems to like it..
I attached the video clip., it was really well together by the ACC.com group.


6M) Herzy's pick 6 vs. Wake Forest
That Clemson / BC game was a great one, as we were both there in person to watch it. To give credit where it's due, the Clemson folks were kind enough to even allow the BC fans on to the field after the game. I've got a great shot of me at the 50.

Herzy's first INT vs. Wake Forest last year might be my favorite "OMG, did he just DO THAT?" play. I'm still not sure how Herzy caught this ball from approximately 10 inches away. He's had a ton of great plays, but this remains my favorite Herzy play, and one of my all-time favorite BC plays.

You'll want to look about 1:02 into the video below.


7W) Harris stiff arm against FSU
This was a cap on a great drive on FSU in 08'
FSU was HEAVILY favored.. But BC was giving the "blacked-out noles" more than they wanted.. and as they capped thier drive Montel Harris stiff armed a FSU defender all the way to the ground.. on his way in for 6! it really was a great feeling!

I believe it was near the end of the first half, and BC was 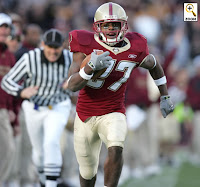 surprisingly up (well, surprising to the non-BC fans, anyway) 14-0. FSU had thrown a couple quick WR screens and Tribble had taken note. The next one that was fired his way, he jumped the route and took it to the house, extending the BC lead to 21-0 before half.

10M) Jeff Smith and Jolonn Dunbar on special teams vs. Clemson in '07

Oh man, how did I forget the BJ Raji bull-rush? Man, that one was great. 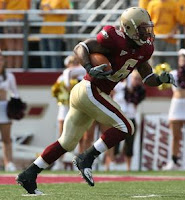 For my last pick, I"m going with cheat just a little bit and combine two special teams plays from the same game: Jeff Smith's return to the house vs. Clemson coupled with Jolonn Dunbar's XP block to win the game in 2OT. This game really solidified the BC/Clemson rivalry we enjoy today, as the Eagles showed the grit, determination, and athleticism to compete with (and beat) some of the best teams in the ACC.