After a convincing win over Northeastern.. Boston College must stay focused. And living the cliche of one game at a time , not overlook Kent State to Clemson the following week.
Mike you are first here, who do you choose?

BC did just that last year, holding Jarvis to 51 yards 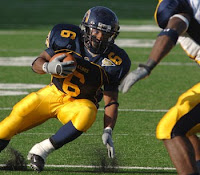 (albeit only 11 carries). Last week, Jarvis gashed the Chanticleer Defense of Coastal Carolina for 265 all-purpose yards, 141 of that on the ground. He's not only a dangerous running back, but a serious threat on the kick return. Both our front seven and punt coverage teams are going to have their hands full with Jarvis.

There were some GREAT runs last Saturday.. but obviously I would like a bit more.

Goodman did very well as a redshirt freshman.. and shows a ton of hope for the seasons to come. But obviously Lapham is the starter for a reason.. to paraphrase Jags. I think the O-Line will be in Sync against Kent State and impose thier will.. on every single down.. expect some pancakes..waffles.. and grits! 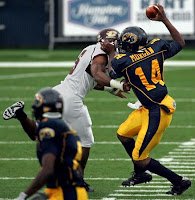 n mop-up time for the recently departed Julian Edelman in 2007. Last week, Morgan hit a nice percentage of this throws, 60%, even though the average per toss was only around five yards.

Included in his 35 pass attempts last week vs. CCar were two interceptions. I think if we force Morgan to make some quick decisions, our D can benefit and get some turnovers early that could lead to some points.

4W)Deep Kickoffs
One of the VERY few concerns I had coming out of the game against
Northeastern.. was deep kickoffs.. Maybe I was missing something.. but I felt like the kickoffs were about 20 yards short of what they really should be.
Key to this game will be a deep kick.. the end zone will even work for me.. as watching the Miami/FSU game amped up the fear of the kickoff game having an effect on the W/L column.

Great call on the kickoffs, Wesley. Jarvis is a good returner and can make short kickoff a very short field for the Golden Flashes.

the top 10 ILB in by Rivals. He sat out 2007 due to NCAA transfer rules and was 3rd on the team last year in tackles. He originally chose the Wolverines over Ohio State, LSU, WVU, Louisville, and a handful of other programs.

Mixon was honored last week as the MAC defensive player of the week (a little bit of a tallest midget here, but given what the ACC did last week, we're really not ones to talk), registering a dozen tackles and credited with creating one of the two safeties the Golden Flashes tallied last week.

We all know we want to run the ball, and this is the guy we have to block to get it done.

was he pretty damn good.. yes. 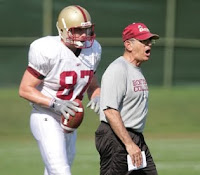 Well it was just the first game, and it was against Northeastern. I was really impressed with the Offensive playcalling by Gary Tranquill. Maybe I am calling this a bit early , I am not sure.. we will see as the competition gets more difficult. But we split our Runs/Passes very close the 50/50 and tons of reps were taken by all.

Like I said this may have been just because of the competition, and may change.. But I was definitely a fan of it last week.. Knowing that , The playcalling will have to continue.. Kent State will show more than a slight wrinkle compared to Northeastern, It will be up to Coach Tranquill to keep them guessing, while hopefully holding something back for the up and coming weeks.

The 6'1" frosh out of Syracuse, NY proved to be a favorite

target of Morgan last week, hauling in half a dozen catches, and posting a nice average of 15.7/catch. To me, that means he's probably the target on a deep crossing route after play-action. If we're going to be in man coverage, Gause is going to have to stick to him like white on rice. Like slime on Schiano. Like failure on Charlie Weis.

I know what you are thinking.. Wesley.. this is such a basic of course choice.. well of course it is.. ha.

We play Clemson the following week.. and trust me .. a QB will make some sort of mistake in this game.. but here is where the QB emerges a starter.. Spaz and Co. Don't want to drag this on anymore than we do. Someone emerges and we know our QB going forward.

9M) WR's stepping up to help out the QB

Last week the Flashes let up only 2.0 yards/carry vs. the rush.

Now, I know that BC has a much better running attack than the Chanticleers do (can you tell I like saying this name? Chanticleers, Chanticleers...CHAN-TI-CLEERS!!!), but it's not like we blew them away last year on the ground. It was respectable, but we were far from gashing them (47 for 230, 4.9/carry).

I expect that Kent State is going to load up and use Vanderbilt's game plan vs. us: throw nine or ten guys in the box and make the QB beat them.

To have that happen, our WR's need to do a great job of getting open while in single coverage. C. Lee 3 looked very good in his debut, as did Colin Larmond, Jr. (who I have no witty nickname for, sadly) who looks like he put in a lot of work in the off season. Billy Flutie caught a nice TD showing great hands and elevation last week, and of course Richie Gunns. I have no doubt that our WR's will step up, and it will make it easier for our still very inexperienced QB's to capitalize on the single coverage.

Wow Mike.. Good job on the picture there!
It almost looks like a who's who for hairstyles..
I agree WR's are important.. and I was happy to see Clyde Lee III get a good amount of receptions. Did you know Gunnell had 0? I must have just been dazzl 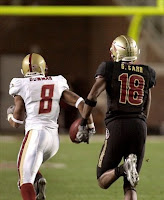 ed by all the Punt return yards he had, that I missed that.

Moving Along .. My draft here is Wes Davis/ Marty Bowman getting an INT...

Mike is it too late to call these guys the bash brothers? I have to think that last week wasn't the last player that they would light up.. But my reason for this is .. hopefully we will stop the Jarvis' running game.. forcing a young QB to take shots down the field.. shots that these "Bash Brothers" will find ripe for the picking!