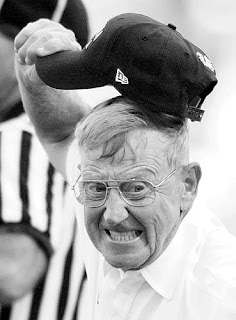 Well folks, another one in the books and another tick in the win column. While many had predicted doom and gloom for our boys in Maroon and Gold at the start of the season, I can't think of a better way to silence the critics than to go 2-0 with a cumulative 88-7 score.

Looking back, what were the best and most high impact plays this past weekend vs. Kent State?
Mike, you're up first.

1M) Getting the game up at STATS

That's right, I'm throwing in the towel early on this one, 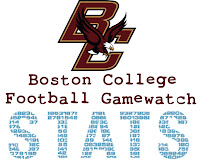 but I don't care. It was easily the biggest win of the day for me.

Last weekend, STATS (our home bar for that Atlanta Chapter of the BCAA) has promised us coverage of Northeastern. Turned out they couldn't get ESPN360.com as they had said previously they could. I did my best to McGyver a feed through Justin.TV, but in the end it was a bit of disaster.
So this past weekend we found a way around things. I brought my own wireless ISP, Danielle from our chapter brought her own lappy, and I purchased $35 worth of cables from Radio Shack to make sure we could get everything to work.
Well, it didn't. For whatever reason, the first CAT-5 cable we used didn't want to work. Then the computer would shut down when we tried to expand the screen to full view. Finally, about 5 mins into the first quarter, everything worked.
Picture was great, sound was terrific (really, really great if you can believe it, as they pumped it into a "zone" where our alumni group was watching the game, not out of the TV's). Over 15 people were able to make it, and we finally got to watch the game.
So that was EASILY my favorite play of the game. Getting the $*#@#$ #($*! TV to work at STATS. Also thanks to the engineer from our game watch who had the final magic touch to get the 4th MIE window to full size. You rock, buddy. 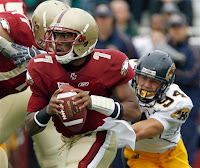 This was only about a 11 yard run. But it showed something we don't have with Shinskie , being a dual threat.. The WRs were covered, and Tuggle looked great as he ran down the middle of the field.. To me , he looked dramatically faster than either QB we had last year (Davis,Crane) This kind of decision making made me smile.

year in terms of expectations to what I've seen on the field this year is Colin Larmond, Jr. I read an article published in a newspaper from Larmond's home town that said he was working very hard in the off-season and he was ready to contribute.
Well, he's certainly not fibbing. He looks great...he truly does. Great speed, great hands, and he possesses the BURST that is needed to make the catch (B-Rob was great at that), as he demonstrated on this pass.
Let's not forget Tuggle's part in this. He did a great job of A) recovering from having an O-lineman step on his foot, then pulling off a nice ball fake to Harris before moving around the pocket and firing the ball deep when he saw the blown coverage on Larmond.
The throw wasn't great, the catch was, as was the play of Tuggle to be able to let the ball fire and recognize the hole in the coverage. Good stuff.

4W) Shinskie holding the ball while being blindsided
Yes, I know this is a bit of an obscure pick.. But hear me out. He is a freshmen QB.

And I still am not certain how the block was missed.. or what exactly was supposed to happen.. But the fact of the matter was that they were able to completely Tee off on Shinskie's blindside, right in the middle of his throwing motion. I would have to say that more than half of QBs drop that ball, or throw a pass that waddles and quacks.
Instead Shinskie holds on to the ball, and limits the damage to just a sack.

Clancy did a great job of being aware and showing

great hands by snatching the ball out of the air after Mike Morrissey made a great play tipping the ball up in the air.

I have to say that Morrissey had a great game last weekend vs. Northeastern with the safety and directly caused this INT that Clancy finished off. It was imperative for this D to get an INT on the board, and while we expected it would come via one of the safeties (as you pointed out in the keys to the game on Thursday), I'll take it where I can get it. Excellent play by our LB's there.

7M) The double shot of hurt on Eugene Jarvis

Early in the 2nd quarter, BC had again pinned 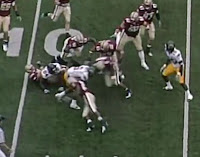 the Golden Flashed back deep in their own territory. Coach Martin turned to Jarvis to get his team out of trouble by leaning on his shifty RB in hopes of stretching the field and letting him cut back to find some open room.

Well, he tried...and he was hit by three BC LB's/DE's at the same time...making a HUGE smashing sound that could be heard perfectly on the TV broadcast. To Jarvis' credit, he managed to bounce back after the hit and reload, now attempting to stretch the play to the sideline. This time Bowman and company were there and laid an even BIGGER hit on the diminutive back.

That play, I believe, was really the end of the game as far as Kent State was concerned...took the heart out of their best player and made them not want to fight any more.

Mike I rewatched the game, and focused on this play.. this really broke the running game for KSU, that was showing promise in the first qtr down.. and wow those hits just sounded nasty.. not just one but both!
Rich Gunnell, or Richie Gunns, as he is also called, showed tons of leadership. Which is exactly what this team needed. Following a game with no catches against Northeastern. Gunnell was able to get 6 catches for 114 yards and 2 touchdowns.
In my mind it really should be three touchdowns, as the deep pass he caught from Tuggle for 44 yards, was a thing of beauty for him to drag the defenders for yards down the sideline, but came up just short, landing on the 1.
9M) Quigly's punting

I gave Quigs a shout-out last week as well for his great performance vs, Northeastern. This week was also great, as Quigs landed THREE of his six punts inside the Kent State 20, two of which were inside the five

(and another at the 25). He did a great job on kickoffs, sans one that went out of bounds, but generally the kickoffs were deep and high. The one punt that did go into the end-zone was from the 33, and could have been downed if we had gotten a good bounce.
I feel like with a team like ours this year that field position is a big thing, and up to this point Quigs has been an unsung hero. Really great job by Ryan. Let's hope he keeps it up as we enter ACC play.

10W) Coaching
Yes, I am aware this is not one Play.. but I have to give credit to coaching. And not 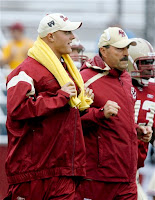 even just one coach. But the whole staff. Now do we have areas to improve? Definitely!! But we have beaten two teams convincingly, and we haven't shown Clemson ANYTHING. No trick plays, no gimmicks, just plain vanilla football. All the while getting our QBs reps, our young LBs have gotten important reps.. All without showing too much of our hand. I was very impressed.
Recap:
BCMike:Stats,Tuggle-Larmond,Clancy INT,Jarvis Double,Quigly punt
Wesley:Tuggle Tuck-n-run,Shinskie hold,Sid Kicks,Gunnell Leadership,Coaching