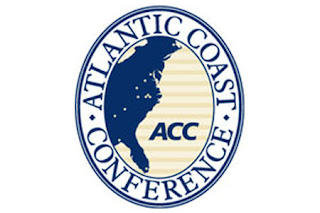 Well, we're only a third of the way through the college football season (scary that it's that far in already, no?), but already there are some players we expected more out of, and others who have taken their game to the next level.

Below, Wesley and I will draft what we think are the best offensive players (skill position) in the ACC to date. I'll let Wesley lead it off. 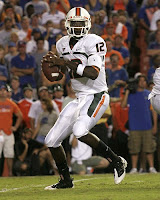 I am going to start with Jacory Harris, I honestly still don't think I pronounce his name correctly..
But this guy is really lighting it up so far, and seems to be VERY cool under pressure. And at some point I honestly felt like I would see him in marron and gold.. But in my opinion, what's good for the U, is good for the whole league.

T-Mobile, Although he doesn't have the strongest arm in the league, I will say, he probably has the best wheels.
and I am not talking straight up 40 speed. Im talking just elusiveness, he has a great pocket presence.. And has jumped tremendously on his passing ability. And while beating Nebraska, and then Miami, has shown great leadership abilities

conversation that two of the ACC's best/most talented WR's to come out in the past five years (Calvin Johnson, Demaryius Thomas) also had the worst QB's in the past five years (Reggie Ball--who I consider to be the worst voluntarily starting D1A QB I've ever seen, and Josh Nesbitt who is a great running threat, but passes like most JV QB's). If Thomas was playing on Texas or at USC, the guy would have his own website promoting him for the Heisman. He's unbelievably talented. Now I know Wesley is going to say I'm going too early for him here because his numbers aren't earth shattering (16/362/2), but I ask you who he has throwing him the ball.

I really feel that the USS Nesbitt, is the reason for a lot of sucess at Georgia Tech. He definitely has a lot of heart, and give the GT fans a good bit to cheer for. And let me say, I am not certain that he would fit in all systems well in D-1 football, I really do feel he fits well in Paul Johnson's option offense.

As I've stated before, my girlfriend is--much to my 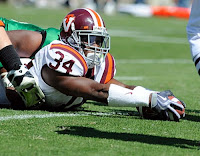 dismay--a diehard Hokie alum/fan. When Darren Evans went down in the preseason, she was very worried. I told her not to be, because I was pretty sure she would be VERY happy with what Ryan Williams did...Williams, as most BC fans will remember was almost an Eagle as his recruiting came down to BC and VT. BC landed Haden, and Williams went to VT. Now I know that recruiting rankings and HS film doesn't mean jack, but Williams was VERY impressive on tape so my expectations for the guy were sky-high.

With the lone exception of fumbling a punt (which one could make the case that lost the game vs. 'Bama), the man has been a machine. Williams is averaging 126 yards on the ground per game, good for first in the ACC (he leads the ACC in scoring, too). Second place? 81.5 yards/game. The delta is that big.

I can't tell you how excited I am to see this kid at VT for three more years (red text=severe sarcasm)!

Hate to say it but you are right on Ryan, he definitely seems like the real deal.
If you asked me what the first and most important thing I would want in a QB, I would immediately respond, I want them to be SMART, and great decision makers. I honestly feel like this aspect is overlooked. And Christian Ponder is very smart. Ponder is a Junior this year and working on his MBA. But his smarts definitely show on the field as well. Ponder seemed to fill in right where Drew Weatheford left off, and in my opinion, could even exceed him. (But lets hope he has an off week this Saturday )

Christian Ponder is a nice choice, Wesley. I honestly don't think the guy gets the credit he deserves. He's a gigantic pain in the ass to play against. 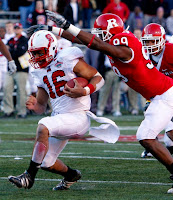 Now, I'm not as big of a Russell Wilson fan as many others out there, but the fact of the matter is that his stats are impressive enough to warrant being on this list. Sure, none of them have come against the only real game that's mattered thus far for the Wolf Pack (vs. SCar 12-23, 74 yards 0 TD), and racked up 8 TD's and 573 yards vs. Gardner Webb and Murray State....

I def have to agree on Russell Wilson, as young as he is, he is doing great. I see him excelling at the next level very well!
I am choosing Thaddeus Lewis as my last pick, purely on speculation, well I guess all of these picks are speculation, but you follow me.
When was the last time a Duke QB was hyped? I mean seriously, the guy deserves credit enough for that. His results don't seem to have come through yet, but QB is just one part of a team, and I feel like they eventually will materialize. 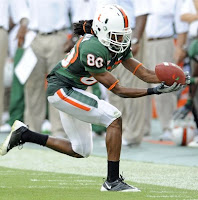 Steal of the draft! Well...unless you thought I had it before, in which case this is just another good pick.

Thaddeus Lewis? WTF are you thinking, Wesley. Expectations were sky-high at Duke this year (4 wins, maybe 5!!), and Lewis and the Blue Devils have not delivered.

I'll go with an unsung hero from the recently broken up Media darling (they were hot and heavy for three weeks until that trip to Blacksburg), Travis Benjamin. He's an undersized WR, but one that just has a huge knack of making the big play. Not only has he proven his worth as a WR, but he's also shown he can help on special teams by returning punts and kicks. He's a dynamic, shifty guy with break-away speed...and fast becoming Jacory Harris' favorite target.