While having someone else read me the news while on a roadtrip the other day. I noticed something. BC doesn't exactly have the easiest names to pronounce. I do not envy the Announcers job to spit these out elloquently , during the game without hesitation.

With this one, Wesley will start.

A native of Nigeria
A redshirt freshmen, in at Free Safety.
There is a reason this guy got the Nickname "O"
As a redshirt frosh, he is a number 2 guy behind Wes Davis.
And has already gotten a good amount of playing time in the first 2 games this year. I expect the announcers to be calling "O" a lot in coming years. 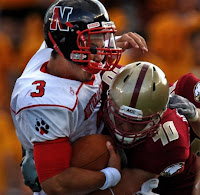 I do have to state before I get started that I am, for better or for worse, the son of an English teacher. This by no means makes me an English major or a great writer (as if that was not obvious), but I do generally have a pretty good handle on names and pronunciations. It's not too often I'm really tripped up.
Well, as tough as Luke, our young true frosh linebacker is on offenses, he's just as challenging for me to pronounce his name after reading it....
Just forget about the U, and the H, and add an imaginary E. Just didn't see that coming.

Backup Kicker from Rhode Island. I honestly don't even know how to pronounce his name either..
And as he has kicked some PATs for us, I honestly don't think the announcers have called his name or number either, as he usually has kicked late in the game for us. I am curious if we will see him some next year as this year is Sid's senior year.

I guess I missed the accent agu or grave on the end of the "e" Tii bad he's not named "Neh". (Nescafe).
Yeah, I can hear you groaning from here. I would have assumed that it would be pronounced "Skay-ff", but apparently I am wrong again. "Ska-fay" is how you pronounce this short but tricky last name.

A redshirt frosh, QB out of PA.
Or is he a FB, as he is now rumored to be playing.
Or is he a TE, as is now listed on BCeagles.com?
I am not certain, but early on this year he was on the list of hopefuls of QBs for this season. And we will see where he ends up as his carrer progresses
6M) Michael Marscovetra

Mainly just because there are so many possibilities. Now that I know it,

it's not too hard. But which syllable had the stress on it was something that everyone questioned before the season started.
Mar-sco-vet-er-a?
Marso-vetra?
Marscov-etra?
There's a reason I started calling the kid "Marsco" a while back. Think I'll stick with it. 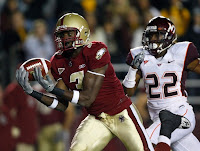 As a deep fade threat in the past, there is a rumor of Momah redshirting this year, which I would be a fan of , as we are losing a lot of depth this year in the position.
Momah standing at about 6'6" really started to come in the groove last year. Hopefully he can pick up where he left off.

Apparently It’s pronounced “Pan-tal-ee”, but usually that would require another “L”. If we’re going by normal English standards, it would be “pan-tahl”.

Of course this is easy for me to pronounce, I hear it all the time.. But from an outsider? It's gotta be a nightmare of a word.
Look out BC Jersey Name Sewer, this one is a difficult one to spell as well.
Let's just call him Sid.

Mainly just because I've called him "Herz-lick" for so long, it's tough for me to break my bad 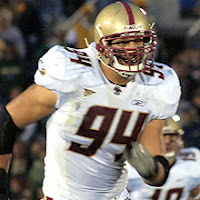 habits and pronounce it correctly: "Hertz-lick".