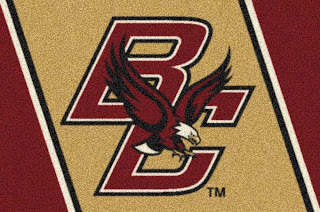 While many fans expect to win against 1AA teams in BIG and convincing fashion, throughout the years BC has managed to play to the level of their competition (be it up or down) in seemingly every sport.

This weekend, we broke that trend. BC's 54-0 thrashing of Northeastern was exactly what this team and we as fans needed. Great, great stuff. Now on to our favorite plays from this past Saturday. Wesley will lead us off. 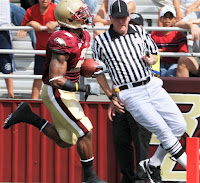 On the first play of offense.. Montel has a great run for over 40 yards.. he didn't just run.. he pounded through about 3 or so tackles. where everyone thought he was down.. and he just blasted through everyone.. and there was an "EAGLE IN THE ENDZONE"

2M) Richie Gunns taking it to the House

I'm going to combine this with his other efforts as well. Richie Gunns has a BIG day returning punts for the Eagles. His first return went for over 50 yards and could have gone the distance. The second one was taken on the fly as he whizzed right by the Northeastern bench on the left sideline. As much of a shot as I'm sure it was to have Montel score the first time he touched the ball, I think this really was the nail in the coffin early as the Huskies' players realized that BC was going to score on special teams, too.

I know this is a boring stat or draft pick.. but Sid was flawless.. 1 FG and 6 PATs . This isn't the most flashy.. but over the past few years have made me appreciate this even more so.. hopefully its a sign of a very productive season for kicking

I loved what I saw from Haden this week, as he didn't dance in the backfield at all, hitting the holes hard and at full speed. The best part about

this play was the block that sprung it--Lars Anderson sealed the corner giving Haden plenty of room to be one on one vs. a linebacker at an angle. While this was no contest this week, I'll take Haden at an angle vs. a LB any week. Great play by Anderson to seal off the edge and excellent speed and balance by Haden to punch it in.

It was a 26 yard pass across the middle.. Now on this one I am going to have to get both sides a bit of credit.. Dave threw a hard ball .. just barely within Flutie's reach... credit to both sides knowing thier limits.. but it looked good

6M) Uncle Dave's bark helping his bite
I thought the Shins pass to Flutie was great as well, Wesley. If you look at the play again, it was actually a great read by Uncle Dave. As reported before, we don't have to worry about arm strength on UD.

For my sixth selection, I'm going to go a little outside the lines here. As another Blogger pointed out (I can't for the life of me find it now that I'm looking for the link, sorry!!!), UD had a very effective cadence in one spot where he was able to get the D-line of the Huskies to jump and the LB's to show their blitz intentions. He called it out, read it, and effectively zipped a ball in to C. Lee 3 (if memory serves) for the first down near the red zone. It was just a very, very heady play and one that was done by a guy starting his first game in six years. It was smart QB play, and that made me happy.

Overall this guy just looked great! Didn't look like a true freshman playing the MLB position.
He was all over the place.. hitting people in the backfield.. and doing a good job of wrapping up. He also almost had an INT in the 2nd quarter.. but it ended up being a good 3rd down tip at least. I was thoroughly impressed with his play and excited to see him progress through this year and upcoming years.

While the kickoff coverage was one of the few obvious areas of improvement this past Saturday, Quigley's punting and the punt team coverage was truly exceptional. Quigley consistently put great hang time on the punts while still delivering very good distance. Punters, much like holders, generally don't get noticed if everything goes as planned. Quiggs could have been invisible on Saturday.

Out of his five punts, he averaged 49.4 yards a boot, with a long of 51. That's insanely consistent. Out of those five, TWO were downed inside the 20. Lastly, the average return on his boots: less than five yards. The near 50 yard average was easily the best of any ACC team this weekend out of punters who kicked more than twice (everyone but GT's Anderson).

9W) Spaz handing down the Yellow towel to Herzy

I thought this showed the kind of class act that Spaz is.. He passed to torch over to Herzy to welcome him into the coaching community. Yes the yellow towel looks good on Herzy, but I'd rather see him on the field.

The reports of Marty Bowman blowing people up apparently is not an exaggeration, and Alex Dulski found out. Bowman had several big hits during the game, particularly in the first half and specifically when he knocked Northeastern's starting QB out of the game with what appeared to be a concussion.

He reminded me of Jamie Silva as you could see a play developing, then all of a sudden you would see something dart in from the right side of your screen (opposite of the play) and BOOM, there was Bowman delivering the pain.