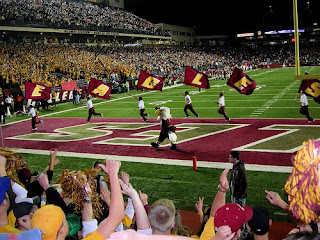 Boston College bounced back after a rough game with Notre Dame, to get bowl elgible by beating a good Central Michigan team, that has a Heisman canidate Quarterback. We will go over our Best Plays from Saturday.

This really went on with out too much pomp and circumstance.. 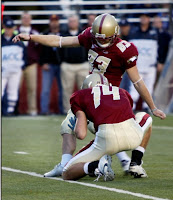 But Steve Aponovicius is now the leading scorer at BC, from out of the stands into the record books.. and not only that , He is STILL perfect for the year.. Way to go Steve, Very Impressive Indeed!!

We've been front and center on the Luke Keuchly bandwagon since week one, and this week was no different. Luke was all over the field again, but this time we

got to see him score his first TD. It was actually a nice play because not only did Keeks go to his drop, but he did so to show the QB where he was. As soon as he planted to where the QB expected him to be, he jumped the route underneath and exploded on the ball. Without hesitation, he headed to the house like he had been there before a thousand times....until he actually scored and showed his first true frosh look when he clearly had not been there before and was unsure who to high-five and where to go to celebrate. It made it that much more enjoyable to watch as an Eagle, because you know he's going to be here for three more seasons after this one.
3W) Shinskie Scamper 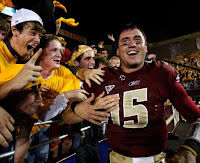 This wasn't the prettiest play, nor did it put up 6 on the board, what it did do was answer some questions that I think everyone was thinking.. He checked all his reads, and they were covered, the pocket was collapsing slowly, so he just ran for about 10 yards right up the middle. It wasn't lightning quick, or dodging a ton of tackles, although he shook off a good facemask to take off. It just showed great decision making
4M) Keeping Dan LeFevour at bay

Make no mistake about it, this CMU team can score. You might 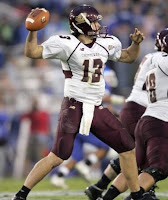 get some wacky statistics the first few weeks of the year when teams are playing Coastal Carolina or ITT Tech and the like, but CMU was throwing up over 32 points / game heading in to this contest. The game (singular) that they had lost vs. Arizona, the D only surrendered 19. This was not a bad team and was lead by what many believed was the best Quarterback BC had faced all year.

We knew it was coming. We knew we would force DLF to use his check downs and dink and dunk us down the field and really earn it between the 20's. That's precisely what happened, with one caveat: instead of having a "spy" or "shadow" on DLF, the D-Line had a kick-off-coverage-like plan to push DLF out of the pocket while staying in their lanes. No big openings for DLF to run through to pick up big yards. The strategy vs. DLF was to make him beat us with his arm only, and through short passes.
It worked.

5W) Claiborne Push on Harris TD
Wow I know I couldn't be any more descriptive.. haha but,

there was one where Claiborne demolished the D line, then got to Harris to congratulate him, and threw a haymaker across his head. Seriously if I played football, I would NOT like to go against Claiborne.

Last week, Shinskie thew three INT's including one on the ND 20 with a minute to go. Montel coughed up the ball twice, the most costly of which was on the ND goal line. This week? Nada. Nothing. Not a one by either guy. They both took care of the ball and didn't give up one turnover. That was huge. Once BC started scoring, we never gave CMU a chance to come back because they consistently had to go the whole field (props to Quigly as Wesley points out here as well), not 20 or 30 yards. For an upset to take place, the underdog usually needs a couple breaks to go their way. We didn't allow the upset-minded Chips the turnovers to allow that to happen. Excellent job by both guys following a collective five turnover day the week before.

I have been happy with Ryan Quigley's punts for most of the year, but this week just was great! I don't know if just somehow he had the wind to his back every time or what, but he was very impressive! Especially the one that just hit on the ten and died , rolling for a could of extra yards. Quigley Definitely getting DOWN UNDER!
Field Position wins games, And Quigley gives us great position!

For those who watched the game live, you probably said to 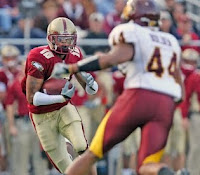 yourself, "Oh, Shinskie...you missed Larmond, he was wide open on that deep out from the slot!". Well, BC dialed up the exact same play the next down with Richie Gunns in the slot and this time Shinskie threw a better ball (battling the wind, I will give him a break as both QB's had issues throwing over 20 yards), and Richie caught it in-stride en route to the end zone.

After having a career performance at ND in a losing effort last week, Gunnell kept it going strong with another outstanding show vs. CMU. Here's hoping he can keep it up the rest of the way. He's putting the final touches on his legacy at BC.

I know not everyone is the biggest fan, but I have liked his hard work and determination week in and week out. What I liked best from Mike this week against Central Michigan is his ability to push LaFevour out of the pocket.. there were several times when Mike would come from the inside and push him straight to the sideline, having him to either run, or throw the ball away. Great play this week by Mike!

This was more of an overall nod, but due to our format we try 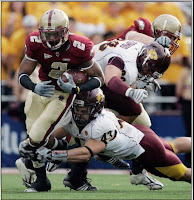 to give specifics. Montel wasn't terribly flashy, but as we've said before, you look up and he's got 120 yards rushing and two TD's out of no where. That's almost exactly the stat line Montel had last weekend. The biggest run of the day, IMO, was the 3rd and goal plunge in the first quarter where BC was down 0-3 to the Chips and hadn't looked especially good on offense OR defense to that point. If CMU stops BC and forces a short FG try in the high wind, who knows what happens. We likely tie the game 3-3, but instead of just tying the game and giving some encouragement to the CMU team, Montel's TD was the start of 31 straight points for the Eagles who pulled ahead and never looked back.