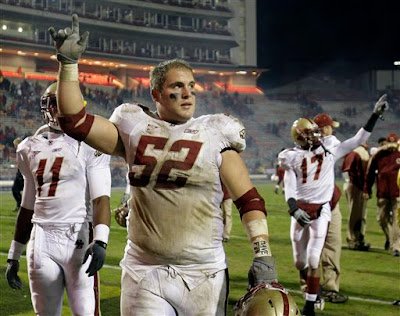 Hope you all had great Turkey Days! The good news for us is that we get to do "best plays" instead of "worst of the worst"...although that prevent defense at the end almost had us in the latter category... 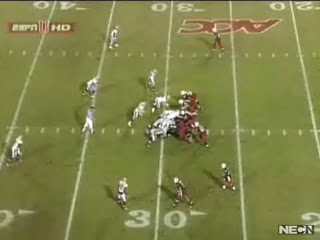 I blinked, I swear that's all I did, as I sat a few rows back, I swear it was only a blink, and I hadn't a clue what happened. BUT, what had happened was, Maryland Quick snap, and Superman matched his nickname. Keuchly literally got over the line and met em in the backfield to get a great stop on 4th down, this was just an awesome play. 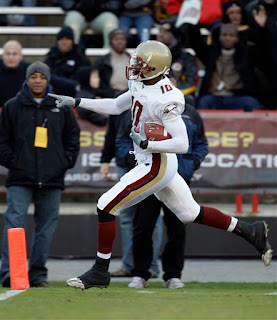 To be completely honest, I thought he went out of bounds on the play. I was yelling at the TV for the Eagles to quickly snap the ball and kick the extra point so that the play would count....

But the replay never came. Larmond's run after the catch was a thing of beauty. I don't know what it is about his stride that makes defenders take poor angles on him, but he consistently outruns them. While it was a nice pass by Uncle Dave, this TD was 90% turn and burn by Colin. Great show of speed and angles by the talented sophomore. 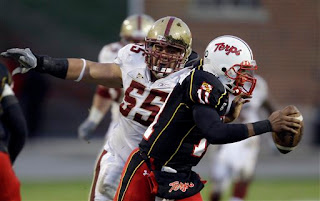 This was a combination of things, 1 being Maryland's O line esp in the middle, "turtling" up. 2 being Scafe powering up the middle.. Its one thing to pressure a QB, and it is a completely different thing to make the sack. Scafe is a lot faster than I gave him credit for at the beginning of the season. Scafe has made great strides throughout 2009, and I am excited for his return in 2010.

Did anyone else have a flashback to the Notre 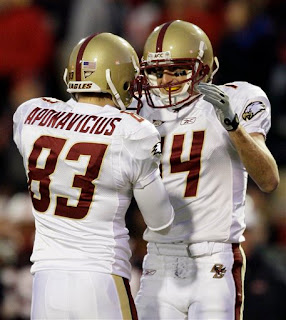 Dame game and Montel Harris when the ESPN-U people started putting up the "Sid is still perfect kicking for the year" stat whenever he was about to kick (much like the ND game where they advertised Montel hadn't fumbled in ~427 touches)?
I again pleaded with the TV gods to take the stat down, but sure enough it came up enough times and finally clipped Sid's streak of non-misses. But here's where it gets great. We all know Sid doesn't have a huge leg, but he's been money inside of 35 this year. Kickers are generally pretty fragile mentally and missing a makeable 31 yarder would have put many kickers in a bad place. But Sid bucked up and came out to try a FG ten yards longer than his season high (of 32). He knocked it through the uprights and that kick wound up making the difference at the end of the game. 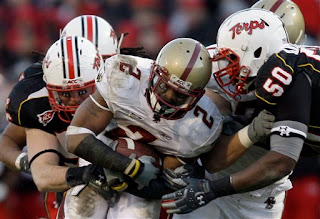 Montel,Montel, Montel. I just cannot say enough about you.. You carried the ball for 41 times.. 41!! Thats a ton! Montel needs a vacation, and some time in the hot tub.
The play with montel that really stuck out to me is the little screen pass to him, Montel excels well on the edge, heck he excels well right up the middle as well.. But I was glad to see we had a screen pass in our little bag of tricks. 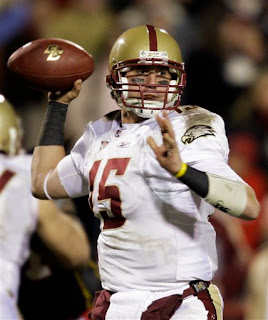 Eagles fans started referring to him as "shINTskie". I think the criticism was fair as it's tough to win games when you throw three plus INT's, but give credit where it's due: Uncle Dave had a big ZERO in the turnover column this Saturday. No fumbles, no INT's. In a two point game, one turnover would have made a world of difference.


7W) Larmond Onside kick recovery
This was the bad feeling in the depths of your stomach.. As I sat with my fellow BC

fans, we were wondering if we were going to get a reinactment of the VT game on us, by maryland getting an onsides kick, and then scoring.. And let me be the first to tell you, this was a GREAT onsides kick, it really was picture perfect. But Larmond, trying to make up for an earlier drop of a would be TD, got at least 50 feet off the ground and caught the ball to quell any worries of a loss against the Terps, and the BC faithful exhaled.

We continue the praise of the kicking staff this 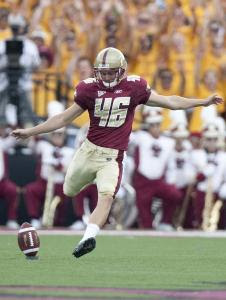 week by giving kudos to Quigley. Out of Ryan's five kickoffs, two went unreturned. Out of his four punts, only one went returned (4 yards), one was a touchback, but he also had a great inside the 20 (actually inside the five yard line) punt that pinned Maryland back deep in the second half. Averaging 40 yards on the day with a long of 47, Quigs is just getting it done week in and out.

9W) Jeff Smith going out with a couple good KRs 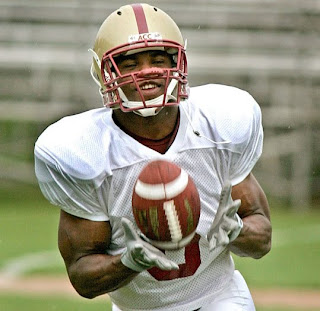 I don't mind going on the record and saying I am a Jeff Smith fan, and although I of course would have loved to have seen him run one or two or for TDs to end his BC career, he did finish solid, with some good KRs 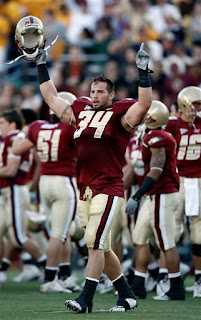 stimy the Maryland rushing attack, keeping them to 61 yards rushing on 28 carries (2.18 yards/carry).
By and large the LB's also did a great job in the pass defense game. Between Big Mac and Keeks, the Maryland offense had a tough time getting anything going.