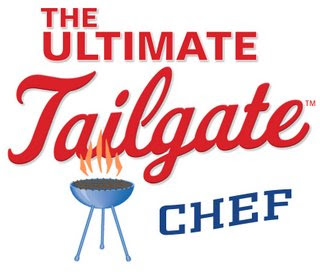 Yes, We are all aware, some tailgates have no food at all.
But Cheers to the ones that do! And beware to our PETA viewers out thier, as this draft may not be animal friendlyToday we list those foods, that taste so great, especially at a tailgate!
Think we forgot something? Leave it in the comments section below, smarty pants.
1M) Brats

Oh sausage, how I love thee. Let me count the ways....

Now it's important that you actually get the HOT 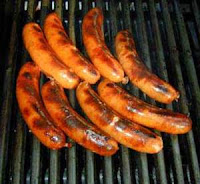 sausage brats, not some sort of wimpy brand-x stuff. We all know about the taste of these magnificent cylinders of porky goodness, but how about the fact that they're best served a little over-cooked/charred?

I don't know about you guys out there, but for me I'm usually akin to a drunken monkey with ADD when gameday rolls around and we're tailgating. A thousand things going on, and it's nice to know that leaving the brat on a little too long is just right. I love a little char on the brat, just makes it taste so good. Plus, all you really need as far as condiments go is your friendly shelf-stable yellow mustard, and you're good to go. Portable and delicious, I give you the slightly charred brat.
2W) Chips/Salsa

Good choice with Brats. Would have been my first choice as well. 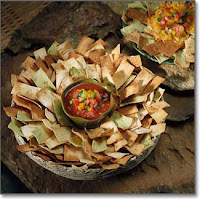 I am going with a good signature snack, Chips/Salsa.
It's a staple of a tailgate. I always expect it to be there.
Its great to munch on, easy for people to pack. And its just plain ole good.
Of course Salsa can be interchanged with cheese dip, guacamole, hummus, you get the drift.
And Chips and Salsa is pretty economical!
3M) Cheeseburgers

Wow, throwing the draft early, eh Wesley? I like

chips as much as the next guy, but there's no way you can take them over the American staple that is the Cheeseburger.
Seriously, there's not much better than a charcoal grilled burger fresh off the steel melting with cheese and just steaming with goodness.

Hungry yet? Exactly. Cheseburgers are an absolute must-have staple for any good tailgate.
4W) Fried Chicken

For the last minute tailgater.. there is Fried Chicken..
This is for when you found out last minute that you are actually hosting a tailgate.
A bucket of chicken shows that you care, but not too much. Or else you would have a grill and all "the fixins"

When time is of the essence, and you want to have something for people to eat, stop by and get some fried chicken!

KFC, Wesley? Only if the team I'm going to watch play is the Whiskey-Tango all-stars.
For my next selection, I know I'm taking them early here, 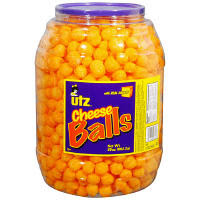 but once you go Cheese Ball you never go....without Cheese Balls? Damnit, there's no catchy rhyme with Cheese Balls...readers? Anyone?

Listen, part of what makes a tailgate fun is the friends, both new ones you make and old ones that join you. Cheese Balls are just a fun food. Not only are they tasty and fat-free*, but you can play toss with them. You can wing one at a buddy from good distance. You can throw it up 25 feet in the air and impress all of the ladies with your ability to catch it in your mouth masterfully (or, more likely, have it bounce off of your forehead). Fun and functional: the cheese ball.

*BCMike's statements on fat-free Cheese Balls have not been evaluated by the Food and Drug administration and should likely be ignored.
6W) Pigs in a blanket 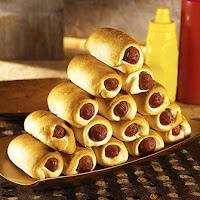 That may be the Ryan Leaf of this years draft.
I may eat some cheesey poofs on the way to a tailgate, but at one? Probably not.

Pigs in a Blanket.. Look at them.. In all of thier Yummyness (if that is even a word)
One great thing about Pigs in a blanket , is they go with every time of game. Morning noon or night... there is no bad time to have one..
as a matter of fact, I could go for one right now!

Not a big winner when the season starts, but a nice warm bowl of Chili once the mercury takes a dive is always nice. I like to spice 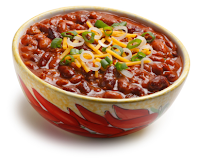 mine up considerably (bland Chili goes into my "why bother?" category along with non-alcoholic beer and caffeine-free Diet Coke), plus the best part about Chili is that you can make it at home and get it hot/keep it hot in a jiffy....so there's no waiting around for anything to cook.

I'm a big fan of immediate gratification, if you couldn't tell already...so this is a big win in my book.
Not a big win for the guy sitting behind you at the game, but screw him, that's his problem.


You got the ice, and you need one more little snack

, is there anything better than some Shrimp?
It's easy in the hand. And mighty tasty.

It is probably one of the few things you will find at a tailgate that is not horribly bad for you. And what goes better with a hot day than some Ice cold shrimp?

Shrimp? What, are you trying to make everyone at your tailgate sick, Wesley? Hmm, hot day outside, let's leave some seafood out in the open air....yech. No thanks, pal.
I'm going with the BCMike special breakfast sandwich. That's right, the bacon-egg-cheese on an English muffin OFF THE GRILL. 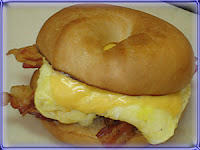 For those who have not savored the bliss, I'll give you a quick how-to guide:

Place non-stick pie pan on grill with grill lit up / turned on. Add 4-5 strips of bacon, whatever will fit. Close lid. Once bacon is cooked, lay on paper towel and repeat with next batch of bacon. Don't worry, half of the bacon will be eaten as you're waiting for the second batch of bacon to cook. This is normal.

Once you've fished the second round of bacon out of the pan, there should be a nice amount of fatty bacon goodness swirling around in the dish. Now you can throw it out...OR....start cracking eggs while stirring the pan. Approximately 8 eggs should fit comfortably. Stir it up, close the top, and insert split English muffins (bagels or precooked biscuits will do fine as well, I prefer English Muffins) on the 2nd deck of the grill. If you only have one level, just wait until the end to toast them.
Once egg has baked, remove pie pan and cut into four pieces, the best you can. Throw egg on toasted English muffin, add a slice of American cheese, top with bacon.

That's how you get your tailgate started at 8am!

10W) Piggy
I must admit, I am a fan of the BCMike special, especially first thing in the morning.

here has got that covered, This hog here should do the trick, and also will bring people up to your tail gate , as it is definitely a conversational piece. So if you want to feed more than a 5 person group, I reccommend something like this.