Keys to the Game vs. Maryland 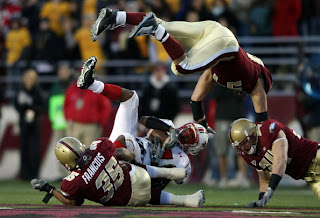 It's another gameweek, so its another chance to chase that W RIGHT?
Here are the keys to victory against the Terps of Maryland!

We seemed to play a great first half last week AT Tech, if we can
stretch the game play for thefull 60 minutes, we will have no
problem beating the Terps. Let's see if our Eagles have it in them
to do so.

2M) Focus on the dream

By the numbers, BC is still bowl eligible. I¹m sure the Coaches are
tired of listening to the haters, the fans, the blogs, the media,
etcŠbut what about the players? Want to shut everyone up? Focus on
the prize:
if BC wins out‹a tall goal by any measurement‹BC will go bowling.
Keep
the dream alive and play THROUGH Maryland. They¹re what stands
between you and your goal.

This is your Superbowl. Every game from here out is. Make it count.

3W) Deep threat
You know mike you are right, if we somehow put together a win streak
and go bowling.. Wow.. I may just have to go lol.
We do have the talent, we just haven't been able to line it all up yet.
Number three is a Steal. Larmond I am calling you out. We require a
few DEEP passes to Larmond for the W, without it , it won't happen,
Maryland's pass defense hasn't been overly stellar, so here is your
chance, you are a better than average WR, here is your stage to prove
it.

Maryland is in a QB controversy and that means two kids trying to
prove themselves and likely taking chances they shouldn't. Let's
bring the blitz early and often and force Brown and O'Brien to think
quick while trying to impress--hopefully that results in some INT's for us.

I'm making a bold prediction here, we score 24 {which we haven't
against div 1) and we win. That's all

We know what Edsall will be Ginger-like the same as Spaz... But we
need to be aggressive to win.

Here is where I talk about an area that we have consistently improved
throughout the year. Run blocking has slowly got better and better as
the year has progressed. A back like Montel can help hide the
problems, but with Montel out the Oline needed to continue to
improve, and they have.
Are they great now? No, simply they are not, but they have
dramatically improved, allowing us to occupy time possession and give
our D a breather.
For us to beat Maryland as I took the Deep threat to Larmond earlier
is going to be to pound it on the ground, as Marylands rush Defense
is one of the worst in the Nation at 110.
Duece/Dre/Tajh.. Tie those laces tight! And just as importantly, O
line keep improving and making holes where the RB expect them.

Many times (and for good reason considering the lack of pass blocking),
Chase has quickly fired to the first option available...many times the
safety valve before the route has even opened up.

Yes, the line needs to allow him tone to do this; but of they do we
need Chase to be patient and find the best man, not necessarily the first man.

9W) Don't out Ugly the uniforms

Haha, this really doesn’t play into the w/l column for the game, but as we are both Under Armor teams, and we will be dawning our white jerseys with stained glass and helmet with stained glass, I believe Maryland will be dawning another new helmet/ uniform design that hasn’t been seen yet. As I like the changes for our home jerseys and am fairly indifferent on the away ones, think we will get a reminder that we are thankful we don't look like Maryland

When Mathias "Kiwi" Kiwankua was here, he would always tell his teammates "Make a play...make big plays", and that's what we need here. If you have an opportunity to hit a homerun, you need to hit a homerun. If that's a sace, it's a ssack. Maybe it's an INT for a TD. Maybe it's shedding that fourth tackler for a TD run. Maybe it's channelling your inner Usain Bolt and finding a way to outrun that last d-back on a fly route.

Point is our guys need to step up and make big plays when they have the chance.

We make big plays on Saturday, I think we walk away with a W.