Sure, you're fine during the fall and early winter when you can turn on the tube or go to any number of college or pro games to get your football fix...but what about the rest of the year? How do you get through it? With the occasional football movie, of course! There have been more than a handful made, some surprisingly good and others just downright painful to watch.

As we begin to put the DVD's away for the better part of the year, what are the best FOOTBALL movies, Wesley?

Necessary Roughness What a great movie.. And I guess having a 25 year old QB on the team makes me appreciate this even more.. but an all time come back/ hard nosed.. we will do what we want kinda movie.. And a HOT girl Kicker.. that goes by the name Kathy Ireland.. I mean who wouldn't like this?

I never thought I would say I enjoyed a movie that starred Sinbad and Kathy Ireland, but you're right, it's a guilty pleasure movie I'll watch every time it's on. I think the best part of Necessary Roughness are the quotes I use WAY too often while watching football.

I digress. My pick won't make many BC'ers happy, but I have to say I honestly love this movie. Rudy is just a great story and the movie version is even better. While they took more than a few creative liberties, it's still based on Daniel E. Ruettiger's real life story at Notre Dame. Rudy also features my favorite soundtrack of all time by Jerry Goldsmith. This final scene gives me chills every time.

For a BC guy to admit it how great a movie about a ND football player is, you know it's got to be special.

3W) Varsity Blues
Mike, if you can ever find me a "Rudy was offsides" shirt . I want it ..Although I do admit Rudy was a good story/movie.. I think 2nd pick is a bit high..
My next choice is Varsity Blues...I love this movie.. Great action hits.. You have the pissed off coach forcing cortizone shots into the players, you have the hot teacher, that strips on the side. And you have the average man "Johnny Moxon" being a hero.. who WOULDN'T love this movie? 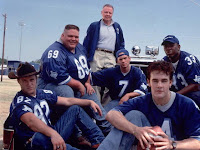 Mike , do you know how hard it is to NOT put up the whip cream bikini picture here?
I just thought it would make the voting a bit unfair .. haha.
But Tweeter and Billy Bob rounded out the main characters, as I feel like this movie is a Great Depiction of what High School Football is like.

I'm going with a comedy here: Waterboy. Nothing like watching the newest player on the South West Louisana State Mud Dogs, Bobby Boucher. 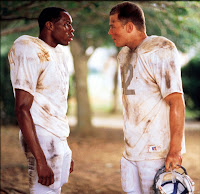 I have to put Remember the Titans up here.. Heck , I would put them up here on the soundtrack alone.. great music.. good family watching movie.. makes you feel good, And Denzel is the man. Is it gory and gruesome enough? hmm probably not.. but it makes up for it in other areas.

I remember the Titans. Know why? Because we played them in High School all the time. I've never heard a team talk more trash and suck so badly. It's tough for me to watch that movie with a straight face as the Titans were

only remembered for being in such a bad area of town that night games were prohibited (too many knife attacks, not kidding).

While I did like Sandler as the goofy and likeably mentally challenged Bobby Boucher, I couldn't stand him trying to play the role that Burt Reynolds mastered decades earlier. I just don't buy Sandler as the alpha male tough guy. Call me crazy.

Burt, on the other hand, can't play anything but and does it well leading the Mean Machine against the guards in this football classic. 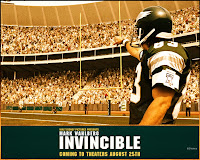 Mike, Longest yard is a great movie.. but I love the recent one as well.
I am going with with Invincible here..
What ? Mark Wahlburg can act? Yes he can..
Some good hitting in this movie, and its got the Disney name attached, so its a feel good one..
And being based on a true story helps as well.
8M) Any Given Sunday

I'm putting Any Given Sunday here for one main reason: the amazing Pacino pregame speech for the Sharks. It probably is #1 or #2 for me for sports movie speeches (possibly second to Hackman in Hoosiers). If you don't remember it, do yourself a favor and rewatch the "inches" speech.

9W) We are Marshall 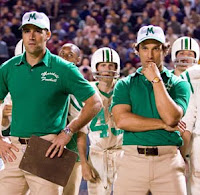 We are Marshall is a Great Movie.. but I have a good connection to it as a teacher of mine was on the team following the crash..
This movie , is a bit different than the typical, football movie , as it shows a bit more insight into the recruiting, which I was a fan of.

I dug "We are Marshall" as well, Wesley. I'm a big sucker for almost anything that's sports related and based on a true story.

Before I get blasted here, I need to say that yes, I have seen 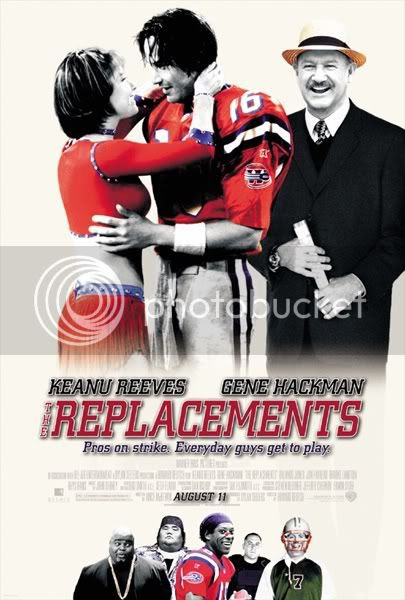 Brian's Song, and no, I didn't like it. I know this puts me in a class of crazy all by my lonesome, but it just honestly didn't do anything for me. I know, I said "almost anything".

The Replacements takes Keanu Reeves out of Bill and Ted's land and actually makes him watchable (a feat I thought only the great Wachowski brothers could manage). It's not a GREAT movie, but it's one you find yourself going "wow, that was much better than I remembered" when you catch it on cable. Plus, I'll sit through pretty much anything Gene Hackman or Orlando Jones is in.

Wesley drafted: Necessary Roughness, Varsity Blues, Remember the Titans, Invincible, We are Marshall.
BCMike drafted: Rudy, The Waterboy, The Longest Yard, Any Given Sunday, The Replacements.