8/25 Draft: best place to watch a BC football game (stadiums)? 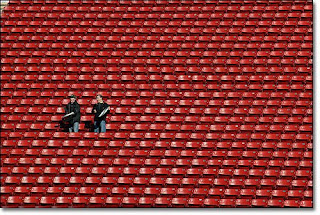 It's gameday time! There are countless places to go watch the Eagles in person, but what is the best place to watch BC play football (stadiums)?

BCMike with the first choice overall:

As a BC fan, you probably often feel like a pretty 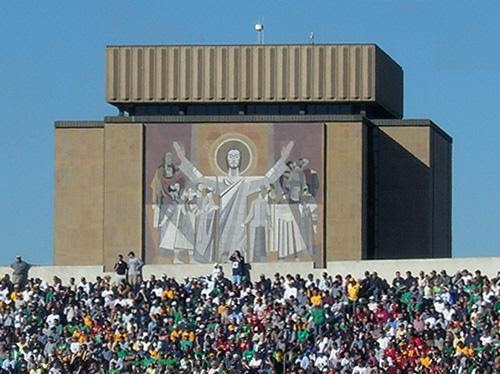 big underdog--especially if you've traveled a good bit away from home base in Chestnut Hill to watch a game. Well, there's no better game atmosphere for a BC fan than a trip to South Bend to watch BC play beat the fake Irish. It's honestly a pretty amazing sight for the eyes in any regard, but when you can leave the stadium hearing the "we are...BC" chants echoing in the concrete belly of the stadium when the game is over...well, that's just tough to beat.

Mike, I've been there.. Great times.. especially when they are undefeated and in Green Jerseys!!
I am going with Clemson here. 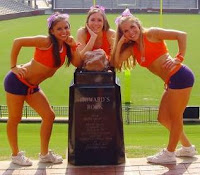 Wow, What a stadium, what a fanbase, what a time... lets start outside of the stadium at the esso club, a gas station turned bar, great place to start the day. Tailgating here is great. Inside it is loud.. LOUD!! and covered in orange.. the tigers run down the hill after rubbing on Howards Rock for luck.. The fans are VERY hospitable, but then again i'm not a Gamecock fan.
3M) Alumni Stadium, Boston College

Great call on Clemson. If the Big East shills would take

a trip to Clemson during the year with BC fans, we'd stop getting all of these faulty articles claiming that fans hated being in the ACC and are pining to return. It's basically an exact replica of Morgantown on opposite day.

I'm going with our home turf here. I feel as if Alumni Stadium really has grown up since BC joined the ACC. The SuperFan shirts used to be looked down upon by upperclassmen, but they have become a valuable marketing commodity for BC and have provided the school with an identity. Now, still much is left to be desired for 50% of the non-student population, but the Eagles in SuperFan shirts...well, I'll put them up against any other student cheering section in the nation. They're helping to change the atmosphere and culture at The Heights during game day.

Man, you stole my choice, I cannot blame you though. It seems like the past couple of years Alumni has really got a shot in the arm as far as game day atmosphere.. Heck even college gameday came up there for the FSU game. And I also attribute a lot of that to the Superfans. And although not a huge stadium, its definitely loud enough to piss the neighbors off!
On my choice, I choose Army. 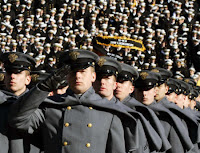 This may be a curve ball for some, but of all the places , I HAVEN'T been to, this rates number one! The tradition brings chills to the back of my neck. I hear the ride up the Hudson before the game is a MUST. And just a gorgeous place to watch a football game.

The best way to explain the Virginia Tech rivalry, now that 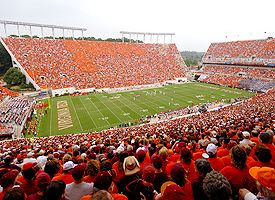 we are in the ACC (it wasn't much of a rivalry in the BigEast days), is to think of how ND fans think of BC and remove the academic snobbery. VT fans are perplexed and confused that these kids from up in Chestnut Hill can even HANG, let alone BEAT their beloved Hokies. To their credit, it's their dedication and loud cheering that makes them one of the loudest and inhospitable places to play in the nation. But silencing that noise (and LANE STADIUM GOES SILENT!!)? Priceless. Well Florida State has a few things going for it .. Being in Florida itself is a pretty good start.
Also, it seems to have a great amount of coeds..
The only reason I let it drop this low, is I felt the tailgating was not quite what I thought it should be. Outside of that, I feel FSU is a great place to watch a BC win.

FSU is a great choice. I've honestly never been, but just based upon the numerous stories about the co-ed's...yeah, that's a trip I've GOT to make.

While the ACC (and mainly BC) got beat up for the inability to put a lot of butts in the seats a mere 1,500 miles away from Boston, I've always had a good time in Jacksonville, particularly The Landing. To me, that

adds to the game day experience as you're there for a championship game, the city is (cough cough) "welcoming" you as fans, and let's face it--there's room to move down to great seats during the game.
Now, if we could only change the outcome of those games, it would be that much better.

I find Georgia Tech to be a fun place to watch a game , and being in Atlanta there is a multitude of things to do, And Tech is located right in the middle of it all. The stadium is very lively for its size, and the rambling wreck rolling down the middle of the field isn't a bad start either.