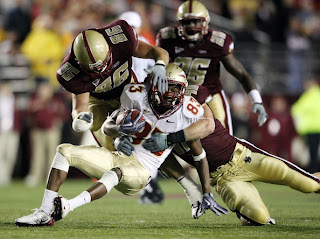 Well it is that time again, game time, as the Eagles come off of their first ACC win, they have a tough test at home on a short time of rest against the Seminoles of Florida State. As this is the first game that is on prime time, the Eagles will try to have their best game forward for the nation to see..
1W) Stop EJ Manuel

I am hoping to see a good amount of blitzes, and some great penetration by the Dline , as EJ is a Quarterback that can beat you in multiple ways. This game I think is going to come down to putting EJ Manuel on his back , a problem we have had with allquarterbacks we have faced this year and not letting him move around in thepocket, or have any quick runs. Already rushing for three touchdowns andhaving a QB rating of 155 means we have to stop him from being successful against us at all costs.

It’s been a tough year, but now you’ve won a game (convincingly, at that) and things are feeling good. The spotlight of the nation is now turned upon you…at home…at night…in primetime. It’s time for us to rise up and play our best ball in front of the nation. Feed off the moment and play the best game of the year Thursday night.

ANNNNDDDD you stole my next draft pick.. Maybe that is a good sign, I think being ready for being on regular espn, not 2 3 or the ocho is a change, so we are undefeated on thatchannel!!
There is no doubt that Florida State watched the film of us vs Maryland, which must look like a boot leg tape of the paris hilton video, but nonetheless they see the constant running that the Duece did over and over and over.. They will be loading the box, trying to stop that run, which will be a great opportunity to dump it over their heads.

4M) O-Line U earning their namesake

While Deuce Finch gained much of thefame for his incredible 243 yard performance in the end-of-days conditions this past week vs. Maryland—and rightfully so—the thing I think most BC fans were happy about is how well our O-Line played. Truly their best game of the year and it wasn’t even close. For whatever reason—they jelled. Was it the conditions? The competition? The back in the backfield? Who knows. What I do know is we saw our O-Line dominate for the first time in YEARS against a D-1 opponent. It’s time to bring sexy back…in the form of our lost title…O-line U.

People in the media and BC haters love to give our fans a hard time…but truthfully, our student section is among the loudest, best organized in the nation. I’ll honestly put them up against any school, any day (it’s the rest we have an issue with). We need our kids to be hyped up and create a genuine homefield advantage for us…something that helps fuels our players and makes the FSU kids wonder hey—what happened here—and what sort of hostile environment did we just walk into? If we are going to win this game it will be a team effort—not just the players and the coaches—but the fans in the stands making Alumni the sort of homefield advantages that Thursday night games have been for our Eagles over the years.

Great Call on the SuperFans, I truly hope we look better on this Thursday night vs. our future ACC Brethren Pitt did last week.
As the Dline is going to be my thermometer in if we win or lose, secondary .. Is going to be the secondary. The secondary is going to more than likely play strict zone as they typically do, but have to cover their zone a bit tighter as CJ has been very successful at 10 yard slants and curls. Hopefully our secondary is ready, because I see them as a key to victory.

Still gives me the creepy-crawlies that Pitt is coming to the ACC. I was / am still all for Syracuse, but I could have passed on Pitt and been fine. Still better than the other Big East dregs I suppose. Moving on…

Sean Duggan has played very well as a true frosh when he was throw into the mix earlier this year and stepped up making his first start in KPL’s absence last week. He played well but we need him to step it up one more notch and be ready for the bright lights, big opponent, big stage game he’s about to play in. We know what Keeks will come to the table with, and Devitto has been solid. We need Duggan to dig deep and do damage (+5 points for alliteration, right?).


9W) Playing for something

HAHA get over it BCMike.. I actually see a value in Pitt over some of the other choices.
The Bowl game is still a possibility, although its hard, its possible. I think the playing for something can keep these guys going. So here we go!

I know it seems like we say this every week…and frankly, I’m pretty sure we have. However, if we’re going to try to run effectively on the ‘Noles, it means keeping Florida State from stacking the box and from having their LB’s and Safeties creep up to help the run. Simply put, the easiest way to do that is to throw to the tight ends early and establish them as pass-catching threats. We do that, it opens up a lot for us…and we’re going to need a lot opened up if we’re going to pull this upset. Get ‘em involved, and get ‘em involved early