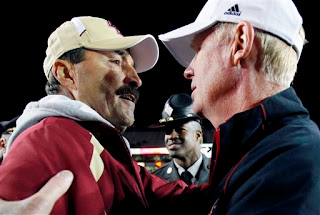 We call this week PatriotGolfer week,as the old disciplinarian comes back in town, the Eagles will have their last home game of the 2011 season.
1W) Don't try to out TOB, TOB.
As it goes without saying, Spaz has a lot of tendencies of TOB, playing not to lose would probably be one of the biggest ones. It's kinda like thatmovie where the guy tries to outrun the semi truck but just cant seem to keep the gas pedal over 65 consistently. If we do get a lead, I hope Spaz somehow has a transformation and just keeps driving..

2M) Blitz Glennon every down
I’m not even joking. A joke would be “hey, I bet Glennon is better than Russell Wilson”. Glennon, like his brother, stays in the pocket entirely too long and often makes bad decisions as he somehow is able to sense the rush yet does nothing to elude it. The kid actually does throw a pretty ball if you give him plenty of time for himself and the play to develop, and a solid two yard pocket with no one pressuring him. In other words, our typical front four rush.
We need to blitz all the time vs. Glennon. Sitting back and watching him have time we’ll get hurt. Pressure him and we’re bound to get rewarded with multiple turnovers.

3W) Chase Enfuego
I somewhat disagree with you on that last one , as much as I enjoyed seeing Asprilla light up Manuellast week, I actually think we are lacking in a couple areas to be successful on that.
1)being lack of Defensive line push 2) KPL is out If both of these two points were different I would completely agree with you.
I think for us to be successful this week we need Chase to show everyone that he is the leader on the Offense, that means rollouts, shaking defenders and making good decisions with the ball. Yes I agree that the O Line hasn’t been doing him a ton of favors, but leaders, lead. So here is your chance to show that you are a leader
4M) All (a)Bordner run-option

Huh? The lack of defensive line push is *exactly* why we need to blitz. If we could create pressure with our front four consistently we wouldn’t have to blitz. Unfortunately, we do need to blitz to create pressure. Iagree with you it’s tough with KPL out, but his run-stop game is arguably much better than his pass D anyway. Duggan has been solid in his absence Ithink.
I’m still a Chase fan—I really am. However, I have to agree with a poster who I saw recently said he thought Chase was getting “David Carr’d”. I struggle not to agree with this. I think Chase is getting a little gun shy to the pressure—and who could blame him with the pass protection being what it’s been thus far. I still think he has all of the tools but they’ve not come together this year as much as he and the rest of us would like.
My key here is to run the Bordner run-option. I don’t know why it worked so well….well, minus the goal-line fumble. Part of it was just because FSU was unprepared for it, but as Wesley and I can tell you from seeing Bordner in person, the kid is physically imposing. You don’t think QB when you see him, you think slightly underweight TE. I think he can do some damage at this run-option thing and gosh knows TOB won’t adjust to it if it’s actually effective. I think we trot it out early and milk it if it’s effective.

5W) D Fletch – Lives!
I think the biggest positive of having Bordner in the game is the threat of him jumping in, as teams have to plan for it and lose the focus on the other items in place, so I like the change of pace.
Haha and I do followthe rationale of no d line push is a reason to blitz, but if your Dline is unable to #OccupytheOLine, when we blitz it ends up being futile, and we just end up with players way out of position for no gain.
Donnie has been one of our most heralded players in the secondary in awhile, although he has been very quiet this year. As it is his senior year, this is going to be his last time to shine in front of the BC Eagles Faithful, so it is time for him to add somefootage for tapes for the pros to look at.

6M) Coaching to win, not to lose by a little

Haha, I like #OccupyThe0Line Iwonder if the students are planning an event for *our* O-Line…. Sigh….

This is a little like your first key, but specifically addresses something that the media and the “roving horde of BC bloggers” have addressed ad nauseum this week: the 4th quarter milking the clock drive and subsequent punt from the FSU side of the field down by 30.

Even if you (I’m hoping a strong IF) have lost all hope that we can be competitive and still fight back in a game, you have to be aggressive enough for me to think that maybe you still want to try to win the game and do some damage. Spaz needs to put the kids in a position where they can fight back and try to win the game—not learn how to gracefully turn over and die so the final score doesn’t reflect how much of a beating we truly endured.

7W) Fan support
This probably won't be the most popular item on the list, but it is something that matters. As a fan you have an association to the team, whether you went to the school or not, you are what fills the stadium, what generates money for the school, and one of the most noticeable items when glancing at games is the fan support in the stadium. Heck when you hear recruits talk about things, one of the biggest items is the feeling / buzz during the game whether the team won or lost.
I agree, Boston College has a ton of hurdles. Lack of tailgating, Staties, rough product on the field, Unemotional coaches, etc etc etc. But as fans its what we have signed up for, whether we think the coach should be returning for additional year or not… As this is the last home game for the seniors , I'd like to see good fan support as it looks to be a pretty nice Saturday on the Heights.

TOB is going to want to run when he can. Yes, I want us to blitz and be aware of the hot routes (red seven…RED SEVEN!!!) but I think our backers can get the upper hand early by jumping the run and forcing NCSU to be one-dimensional. If we can force them to pass and get pressure, I think we’ll have a good chance at a W.

9W)Keeks being Keeks
We say it most weeks, but its very true, Kuechly week in and out is our best tackler, thisgame could easily be his last game at the heights ( something I hadn't really thought of before)
I hope that I am wrong, but it is very possible as he is already viewed as a first round pick. I would like to see Keeks going out whether it be the for the season or for his career with a bang.

I think this will be a very tight, close game. One that is likely determined by less than a touchdown…which means that our kickers will most certainly play a roll. Freese will need to be money for us if it’s a close game and be ready to trot onto the field to kick the game winner at a moment’s notice. Get that Duke monkey off your back and win the game!