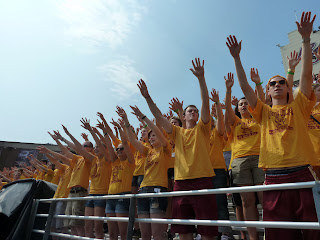 Worst of the Worst
It's been a long time since we started out 0-1. It's also been a long time since someone has run over 200 yards up on us on the ground....and It's been awhile since we had put up 375 in the air. While there truly were a good handful of positives, nothing really matters when you lose. Here, Wesley and I examine the worst of the worst from our 2011 season opener.

1Wesley) The last toss of the game 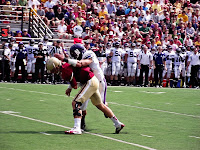 Not only did we lose some valuable time on the clock, it ended up being our last throw, which I was expecting to have three end zone chances.
ground for minutes after making everyone concerned about the seriousness of the injury, fortunately it was reported that it was nothing serious after the game.

2Mike) O-line U takes a vacation 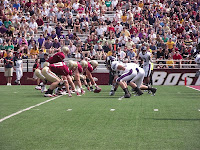 Rettig scrambled right, and got blindsided sacked, to top that off, he laid on the Worst run blocking I have seen at BC in years. Pass blocking was bad early and got a little better by the end of the game but as a whole this was a day to forget for the starting five. 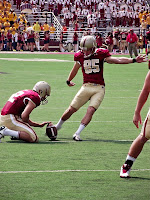 Mike I agree, run blocking wasn't near where it should be, I
am still not understanding all of the position changes on the line
(outside of injury) just a week or so prior to game time.
We have gotten spoiled with field goals lately, there is no doubt about that. When Freese missed two in a row, it hurt, badly. I think he is entitled to a bad game, but missing these could have altered the outcome of the game, hopefully Freese is back to his normal self against UCF.


4M) Not punching it in opening drive
The first play was a great play for BC and accounted for more than half of DreW
ill's rushing yards on the day.It was a phenomenal start but Andre got pushed out just two yards short.
Our inability to punch it in on that run / on first down / on second down / on third down gave NU the first real victory of the game as the Wildcat defense forced a FG instead of a TD shoved down their throats on the road the first drive / play of the year.
It as a huge missed opportunity and set the tone for the rest of the game--which wasn't good for BC.

Mike I have to agree there as well, definitely a momentum breaker, when you start off that strong you have to be able to finish the job. Andre ran high, and tried to beat the defense with his speed only, he is a very talented back, but needs to be a little
more patient. I am not sure what it is, if we just have a mental block, unable to make adjustments, or what, but a dual threat QB continues to give us fits.
This is a lot of the reason that I was hoping that Persa would play. Id rather have someone that tries to beat us constant in the air than have to worry about them
optioning or running it themselves.

6M) Lack of vertical passing game (until it was too late)

Agreed with the mobile QB hurting us. Colter rushed 23 times on us and ran the 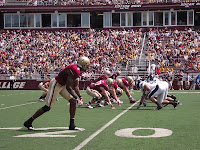 read option going to the back another 15 easy. We just consistently gave up positive yards and that hurt for sure.
Six here I'm saying lack of deep passing. It seemed like when we did actually go downfield, we had a great deal of success even tough several of those were lucky "500!" balls that Momah got.
Regardless, we continue the short passing game / inside rushing game despite facing 10 in the box on press coverage. We needed to go deep early to prove we were capable (link to keys) and we simply didn't do it enough to have them respect the mid to deep passing game.

This is one of those things that probably irritates me the most.
Goes hand in hand with O line U, how did what we were known for end up being a weak point? There were several plays where we just had a hard time wrapping up
. I am not sure if this is attributed to youth, people out of position, or just a very mobile team. I expect BC to be able to be a solid tackling team, and I expect to see that soon.

8M) Being unprepared for the hurry-up 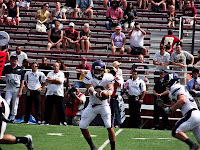 It was blatantly clear that our D, specially our D-line was
unprepared for the hurry-up offense that Northwestern ran. We were gassed early and gave up numerous easy four to six yard runs after plays that gained yardage.
I don't know if that falls on the coaches or players for lack of conditioning, but it was embarrassing to see.
9W) Not able to stop the line

Mike I agree, with being unprepared for the hurry up, and it made it even worse that there were no adjustments made.
On number nine I am going with the run d not showing up, another BC staple is stopping the run, they were number 1 in the nation last year in that area.. that¹s correct, number 1!
Meanwhile on Saturday Northwestern was able to put up more than 200 yards on the ground, hence beating Boston College at their own game.

I don't typically complain about the BC D-back cushion, but our staff had to 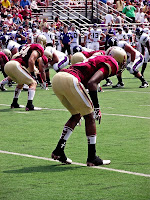 A) Reevaluate when Colter was the QB and B) when Northwestern through a five yard out for the 15th time to ALJ's side.
I get it that he's a true frosh. I get it that you don't want to get beat deep. However, you're facing a run-first QB that showed early he could not throw downfield early if any pressure was applied.

This non-adjustment allowed NW to drive down the field in the last two minutes of the first half in painfully easy fashion and tie the game up before halftime.