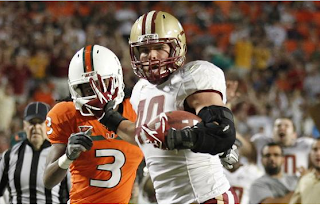 Well its Christmas in September, or something like that I feel like we have anxiously awaiting today and it is finally here!
We start off with very good in conference game against Miami.. We are drafting the keys to the game for BC to start off with a W!

It's no secret the D-Line was decimated by graduations and injuries last year, forcing some younger Eagles to play ahead of schedule.  Some did admirable jobs such as Ricci and Wujciak but no one was dominant—that's putting it lightly.
We need Kaleb Ramsey to make a statement that he has the goods to be a day one NFL draft pick and dominate inside.  We need to get consistent pressure on the QB without blitzing our LB's.   If we're able to force Morris out of the pocket and make some rushed throws into our opportunistic pass D, we'll win this game.  I'm calling it right now.

If we rush four and Morris hangs back in the pocket all day, we're toast.

I really feel that as Rettig goes, the team will go. Last year we had a handful of areas we needed to improve on to give Rettig the foundation he needed to be able to succeed.
Well that time is really over. This is Rettig's time, his team and everything looks like it can be in sync, but we have to be able to demonstrate that we can stretch the field.
Keeping Rettig upright will be key to give him time to get comfortable in the pocket and make some good passes.

Here at BCDraft we are BIG Bobby Swagger fans.  Kid is under-rated and underappreciated in the ACC and perhaps by our own fans.  The kid is just a terrific receiver and a great slot one at that—and those are the hardest to find.

Therein lies our next key—whomever steps in as the third WR must take over that slot WR role and flash open to Rettig early and often.  He has to be able to take the big hit after catching the ball while running fearlessly through Linebacker Lane.

We've seen different people listed on the depth chart as possible replacements (I think it will be Spiffy Evans), but we'll only really know once they line up.

BCMike I hate to follow you with a similar post, but I actually think this one is a bit more important. Pantale became a key to success during the last game against Miami, and was poised for a great year.
Rettig will need a bail out option at times ( and the TE is the logical person for this) but without Pantale, it looks like we will be changing our scheme a bit. Putting in Parsons and younger OL will make this position seem like just another lineman, or a strickly blocking TE, which reduces the amount of threats we have, and in my mind translates into playing safe.

5M) Sylvia lining up at CB

Dang!  You completely stole mine here.  More specifically I believe they need to go to Parsons early just to prove that they're willing to use him as more than a blocking end and force the LB's to honor the spot.
My biggest worry on D is Sylvia at CB.  He was tremendously fun to watch as a DB last year playing in the free safety position as he was overly aggressive and threw his body about with reckless abandon.

Now while this was fun to watch, often times it seemed as if he would rather the WR, TE, or RB be able to catch the ball just so he could punish them with the people's elbow and drop the hammer on them.  Again, while entertaining, it wasn't always smart or effective.
So…we're going to play him at corner now?  I don't know if this is just the ol' cat and mouse game with Spaz if he's going to be able to use CJ Jones or another corner, but with Sylvia at CB we're going to need him to play really close coverage and not wait for the receiver to catch it first.  That is asking his guy to step up a ton to play this position.  If he's able to, that's a big win for our D.

BCMike- Agreed, Sylvia can lay the lumber at times, but I do find him out of position a decent bit. Maybe that has changed, maybe he has proven himself in camp. I truly do not know, and hope for nothing but the best obviously tomorrow.

My choice is going to be BC Fanhood. And let me explain this for a quick minute. BC fans now have a ton of excuses not to be hyped . Losing Gene ( although that may actually hype up some) A coach that is viewed as a lame duck. Not ranked preseason, it's a holiday weekend. There are storms in the south, El Nino, Global warming, Flutie moving to Florida. The list goes on and on and on.

BUT! We are freaking playing Miami the first game of the season. With a new offensive coordinator, good times with good friends watching a great game. I really hope our fans can be there to the players for the hard work that has been put in for months and even years- they deserve it!

7M) Rettig getting over that INT

Once again I agree with you and ATL Eagle ( http://atleagle.blogspot.com/ ), the fan base is so tired of being morose and if GDF leaving is a sign of anything, it's that this team has to win now or there will be change immeaditely.  As a fan, I'm encouraged either way to be frank.  Get it?  To be FRANK?

Anywho, I'm going with Rettig not letting incompletions or the likely INT's get to him.  I'm not saying that he's an innacurate QB or unable to understand the offense or anything like that—but this new Doug Martin offense is about quick routes, quick cuts, and letting the ball go early; often times well before the WR has made their break.
It's likely that Rettig and the WR's will make a mistake or two…but we can't be timid or not trust the system.  If we mess up, we have to forget about it and push forward.

With the young secondary, a hard push on the line is going to be critical. The success of that line should be based on the full line, but in particular Ramsey. He is our beast, when he is healthy. We need him to 1) Stay healthy and 2) lead the charge.

For years BC fans were spoiled by future NFL caliber QB's...now the same can be said about punters with Johnny Ayers and Ryan Quigley.  Quigs was one of the consistent right spots last year and punted us out of trouble more times than I can count.  We need Levano to be the next great BC punter and help us win the field position battle.

BCMike, I think you got away with a steal in the 9th round, I think Levano will be huge in this game no doubt, but on the plus side he has looked very good in camp.
Without question we have had a lot of very good  punters in past years and have become somewhat spoiled

You know when you have a running game which is RB  by committee, one of them has to step up. You play the hot hand.  Andre has been kept out of a few of the last practices and scrimmages because the coaches feel like he is the healthiest, and has the least to prove.. We keep hearing about his performance against Syracuse two years ago, and want to see a redux of that.. We need another showcase like that, and I think vs Miami at home as a season opener is the perfect stage!