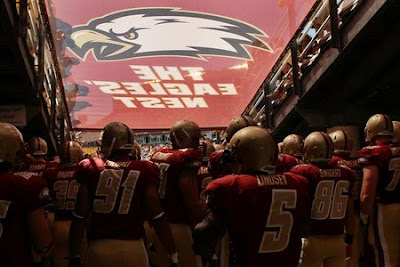 Well we are really liking the trend here at BCDraft as we much rather be doing plays of the game over worst of the worst after a game but, Wow this is going to be hard.. it was all ugly, but we got the W, so that makes it a bit easier to swallow. The seniors are able to extend thier season, and go out with a Win in thier last game at the Heights.

We needed a stop, it’s the seniors last home game.. And guess what Club grips the INT? none other than BC’s own Mark Herzlich. What a way to end his BC career at home.

I honestly don't remember the last time BC had two backs go over 100 yards each vs. a BCS opponent, but Andre "The Giant" Williams came up big like a giant when we needed him most. Both backs had great days and we can only hope Montel is OK after the knee tweak

As it looks like this is our deep option, I can get used to this freshman combo, amidon was double covered but was able to pull down a great toss by rettig for 6

After such a brutal year, I can't believe that we're actually going bowling, but we are...continuing our 12-year streak.

5W) Keeks break up for the W

We know Luke is great but he seems to remind and surprise us each week.. After continuing the 10 tackle streak quite easily , he was the one that was able to swat away the final throw from virgina and get a w for the eagles!

While I am still very anti-Tranq, I have to say we actually took SOME shots downfield. Chase throws a terrific deep ball (although sometimes into coverage) and tossing it deep causes the safeties and 'backers to respect the deep threat and not just stuff the run. Kudos to Tranq for tossing it downfield occasionally.

Momah, played an overall great game, but threw pass from rettig to momah out of their own end zone was nothing short of just a great play by both of them.. Momah is a great mismatch against shorter db's and rettig had great zip on the ball to get it to him quick.. Also good call by tranq, I was expecting dive left lol

Despite playing about half the game, Montel passed two more BC greats and now sits #2 on BC's all-time leading rusher only looking up at D-knight...and he's got two more games and another season to go before he's done! Congrats once again to Montel.

When he got injured I was a bit worried about CJ coming in because of his play early in the season , appeared to be that of what was typical for a freshman, erratic. CJ came in, and played very well, even in on some tough stops. I am very impressed with his progression since earlier this season.

CJ did play pretty well, perhaps a bit too far off the ball, but better than getting burned deep I suppose.

It's easy to forget about kickers when things are going well but let's give thanks to the terrific season Nate Freese has had. Yes, his FG was a chip shot and you expect the XP's and short ones to be automatic, but all you have to do is look across the field to the other sideline to realize that is simply not the case