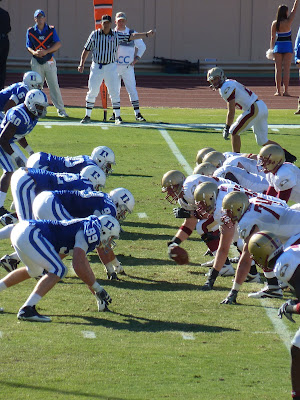 A win is a win, right? It was scary at times, but the good guys held off the storm and extended the win streak to 3. Boston college plays Virginia at home this week, and then finishes with Syracuse on Thanksgiving weekend in the dome.

This touchdown pass was great for several reasons. One being swigert was open the whole time, but rettig did a great job of looking at every other reciever to buy swigert even more time. Two, it was a great long bomb. Three , freshman to freshman, I could get really used to this over the next few years!

21 tackles? Seriously? The guy is leading the NCAA before the game started....and now? Now he's 40-some tackles away from the single season record for tackles. Two games sounds like it would be tough but if BC wins one of the next two we should go bowling and Keeks should get the NCAA record.

Let me put a disclaimer first, Montel helped make this game a bit more interesting than it really needed to be by fumbling twice in the redzone. But Boston college was able to make it out with a W, and montel has definitely personally pulled the win out of the fire for the rest of the team in the past, so he undoubtedly gets a pass. Montel's TD run was a good showing of his great balance and power as he was hit initially behind the line of scrimmage, (as most times) and was able to run sideways, do the limbo and get into the endzone. To top it all off he still had over 100 yards on the ground and averaged around 5 yards per carry.

We needed Max to have a big game and he did just that registering a couple of sacks and a couple TFL's. Getting pressure on the QB is so important for our bend bit don't break defense and Max has been the difference maker in the last couple weeks.

Momah has officially found his pair of recievers gloves. Until recently I was starting to think that he was an experiment at WR and not at DE. Well Rettig was able to toss a high ball that only Momah or someone on stilts could bring in, well this time it was Momah, and it was a great catch.

While it would have been great to have Duke stay in the negative, bit four yards rushing and now leading the nation in rushing D is something I'm going to be just fine with.

7W) Not having to watch on espn3

Ill take BCMikes advice on this that the commentating to this game was horrible. Now don't get me wrong Warrick dunn was a good running back, but him and his sidekick are not great announcers to put it mildly.

Wesley, count yourself fortunate not to be subjected to Ryan Rose. While Warrick Dunn is far from Keith Jackson, Adam Rose once solidified himself as the worst announcer on the planet.

At 8 here I'm going with the Amidon "9" or "streak" or "fly" route, whatever you like to call it. Amidon consistently gets solid separation on this route giving Rettig a great target. I don't know if it's at the line of scrimmage or the cornerbacks are just not respecting Alex's speed, but any way you slice it that route has been good to both Alex and Chase.

BCMike, good call there, I am also VERY impressed with Alex’s blocking ability, which has been a problem throughout the year. Well I felt like it was important enough to put in our Keys to victory, and it was. If Rettig would have thrown an interception we could VERY easily be talking about how we lost to Duke. Thanks for reading the Keys on Friday Chase!

At 2-5, I was pretty sure I was watching the end of an era of BC football, not going to win one FBS game let alone go bowling...but now...well, hell--one win vs. UVA *OR* 'Cuse might get us in a bowl game...and two wins most certainly will. It's not the dream season many of us thought that 2010 was going to be, but finishing strong (enough) to go bowling and keeping that streak alive would be quite an accomplishment at this point.

I like that our boys are actually giving us something to hope and be positive about.