9/3 Draft: Keys to Victory vs. Northeastern

Well it is that time again.. I can actually feel the cool brisk in the air, all the way down here in Alabama.. and that tells me one of two things. Either the local sewage plant is having a BIG issue, or that it is game time.. And According to my calendar, it is the latter.
For this game we are going to Draft the keys for BC being successful against Northeastern.

I have an overwhelming feeling that the first half of this game may be a bit more that a little boring , as ball control and wearing down Northeastern's Defense is going to be the mantra. Our Offensive line is VERY good, make no doubt about it. They are going to be working hard to make holes for the small back to shoot through. And even though I am certain that Northeastern is aware that will be the early game plan, I don't think they will be able to stop it . Imposing our will.

2M)Ability of the young LB's to read and react

Herzy is out. Big Mac is out. Now Will Thompson is hurt.

If you had asked me at the end of last year who our staring LB's would be for the first game of the season, I am pretty darn sure I wouldn't have come up with Dominick LeGrande, Luke Kuechly, and Alex DiSanzo.....er make that Dan Williams.

We've heard great things about LeGrande since his conversion from Safety, and Kuechly is arguably getting the most press as a

ALSO, now since DiSanzo is out and Williams is in, Steve Conroy is reporting that LeGrande will move over to SAM and Williams will cover the weakside. Sheesh. Enough already. Give me a depth chart I can write and article with!

The biggest problem with really young and experienced LB's isn't the physical portion of the game as much as it is the ability to quickly diagnose the offensive play, read, and react to the ball. Even the best of players can look far less than stellar if they're green at reading and reacting (Mac's first playing time comes to mind, now he's a beast).

So my biggest concern, and the real key to the game for the Eagles as far as I'm concerned is the play of our linebackers, specifically their ability to quickly read and react to the plays that will unfold in front of them.

3W) Montel Harris ability to get tough yards up the middle 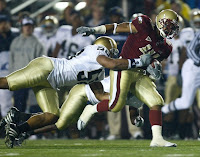 Mike, GREAT call on your second choice.. I am ready to see what this "young herzy" in Keuchly looks like on game time.. my hopes are high!
If you saw ANY of the 2008 season, you know Montel can get the tough yards up the middle.
But I think it will be a bit more often. Harris showed last season that he can shake a tackle.. or 2 or even 3.. He truly is fun to watch. I think he will be shooting between tackles a good bit this Saturday.

My guess is that the offensive line will absolutely dominate the smaller Huskies defensive line. They technically play a 3-4, with the NG/DE's averaging a paltry 250lbs. From the weights, I'm guessing they often throw the fourth LB strong side (#97 Jason Vega 6'5", 275), but regardless I anticipate that it's 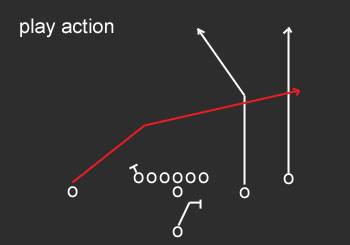 going to be tough sledding for these Huskies on the DL, with both Harris and Haden having a lot of success early.

For that reason, I expect to see the LB's on their toes leaning forward at the snap, the safeties creeping up not too far into the first half. That will lead to some one on one coverage deep for Richie Gunns and Larmond, with Jarvis and Flutie likely running the slower crossing routes.

If Tuggle and / or Shinskie can hit these guys who will very likely be in single coverage, it could mean a big numbers game by the offense. 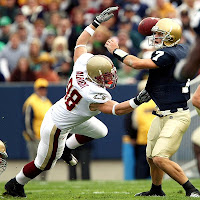 I am soo ready for this.. Albright has one of the better pass rushes that we have had at BC in the past while.. He was definitely missed in 2008 while he sat out due to injury.. And believe me he will be playing with something to prove this year! An Albright pass rush will help the DTs as well, which other than Scafe ( Pronounced Ska-fay) are a fairly young bunch.

6M) Austin Giles holding his own at DT

Great call on Alex there, Wesley. I can't think of another player that has been as under rated at BC by our own fans in a while. Albright is, in my mind, clearly the

best pass rusher we have had since Kiwi. When healthy, he's a beast and averages (AVERAGES) something near a half-sack a game over his career. If he's ready to go on Saturday, Alex Dulski is going to be running for his life.

If there's one story that's been beaten to death in the "hey, we saw this coming, we have known this for eons" category, it's the fact that BJ Raji and Ron Brace have graduated and moved on to the NFL (did you know that??). I'll also say how amazing it is that they've gotten ten fold better since they left the team. I think we'll have to start calling that the Matt Ryan effect (remember those who campaigned that Brian Brohm and Andre Woodson were far superior). As soon as they leave The Heights, they become the reason we won.

Pardon me, I'm just still bitter that I haven't been paid on a Matt Ryan / Andre Woodson wager I made a couple years by a "friend" of mine. Where was I...

Oh yes, Giles. We've known for a while we would have to replace Brace and Raji. We had all assumed that it would have been Scafe and Ramsey. Now, Giles has a great motor on him, but pure size is my main concern over technique. He's played with some success at DE, but it's a different mentality at DT. I'm personally very surprised that Ramsey was not able to grab the horns on this position, but I guess the staff knows better than I do (let's hope so!). I have plenty of faith in Damik Scafe, and if Giles can play well, we'll be able to stuff the middle and stifle the Northeastern rushing attack.

7W) Steve Aponavicius "Sid Vicious" FGs
The great Sid Vicious tale.. remember 50 years ago when he was grasped outta the student section like a fan would be out of a Bon Jovi concert?

Well we have been "living on a prayer" ever since..
What we need for Steve is going to be a quick comfort zone.
and I am almost certain that he can bring it.. the spring and summer has shown some substantial progress, but we all know that kicking in a live game is definitely different.. but if Steve proves to be reliable this Saturday, I think we will all be breathing easier all season long.


8M) Tuggle/Shinskie taking care of the ball in the pocket

I don't want to use the cliche "game management" term here, as I'm

No fumbled hand-offs, no fumbles when scrambling from the pocket, holding on to the football when (if?) you're sacked, and keeping two hands on it should the QB rush past the LOS.

If we don't turn the ball over in our own backfield, I honestly feel like we'll be fine (and have a pretty good shot at a shutout).

I do not envy this man this week.. Respect yes, envy no.
He is a captain, a senior, a great Wide Reciever.. so somethings are going to be expected of him.. but this week they are going to expect a bit more.. TOUGH catches.. Think about it Bosto 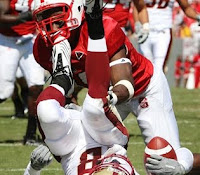 n College is going to play at the MINIMUM 2 Quarterbacks. Thats two styles, speeds, looks, reads, that a Wide reciever has to get used to. maybe you say ehh , whats the big deal with that.. I respond, that none of these QBs have thrown a single college pass. I expect Rich to really have to be a blue collar reciever , working for every catch, short , long , across the middle, etc. I expect him to do well Saturday, just hoping he stays safe.


10M) Josh Haden being effective on screens and spread plays

Nice Richie Gunns shout-out! B-Rob and Richie Gunns are some of my favorite WR's to play at BC the past decade. I think RG also has a legit shot of being drafted, a position of which BC has not had a guy drafted by the NFL for twenty some odd years. Just when the Huskies D lets out a sigh of relief when they see 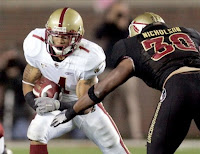 Montel Harris jog to the sidelines for a breather, or possibly not coming out to start a series, they're going to be in for a surprise. Last year Haden played through a lot of injuries and was never really at full strength. By all accounts, he is this year and has looked good. Haden's greatest asset is his full out speed and shiftiness. That should be on full display when Tranquill gets Haden the ball in positions like a screen pass, shovel pass, etc., which allow him to get a little ground in front of him before he gets going. I don't think that Northeastern has any guys who can catch up to him, so it will be interesting to me to see how the new staff uses Harris vs. Haden.