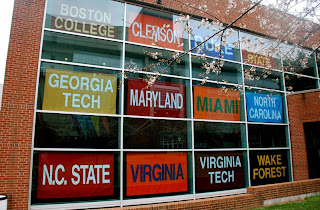 Today we draft the ACC coaches. Not on recruiting, or handling the media, but just on gameday coaching and player development. Today BCMike will lead it off.

Simply put, this guy is just a hell of a coach. Much like BC, historically, Wake Forest has not gotten the biggest "5 star" recruits every year, 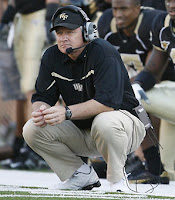 but Grobe has turned this program into a winner--and is now sending kids to the NFL (and high rounds of the NFL at that). He's a super-smart coach who does an incredible job adapting in-game to the challenges that face him. To me, if he was at a bigger name school like a Texas or a USC, he would be a household name. I have all the respect in the world for Grobe.


2W) Frank Beamer
Good call on Grobe, he is a heck of a coach, with a great system, just wonder how long h

e plans to stay at Wake Forest?
On my pick I take Frank Beamer, I mean how could I not.
This guy has done Great in the ACC, he is a natural leader, and he even has a style of football play named after him.. Beamer Ball..
I have a lot of respect for Beamer and the style of play he brings to the ACC.

Beamer is a good call, Wesley, no doubt. But for me, I honestly 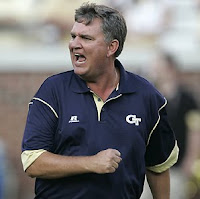 would have taken Paul Johnson first. It's not that I don't appreciate what Frank has done, but I just feel like Paul Johnson is in the top 5, perhaps 10 coaches in the NCAA's. I really and truly do. He's bringing back his take on the wing option and has made GT into a winner....it's scary to think he's done all of this with kids who, for the most part, aren't even his recruits and weren't brought in to run his system. I remember what a pain in the ass Navy was whenever we played them and he coached them. When he came into GT, something like 11 players transferred. I have to say I'm very glad they're on the other side of the conference; because I don't envy going up against his system once he has HIS players in place.


4W) Bobby Bowden
I like Paul Johnson, I really do.. Great coach at Navy, and
Giving Georgia Tech something to cheer about, there is no doubt about that

Just ask Miami.
But I have to go with an oldie, but a goodie.. Bobby Bowden
I mean seriously.. I am very surprised he went this late in the draft. He is a winner, and I don't really care if really coaches anymore or not. He wins. and that's that. Is FSU back to where it used to be? hmm probably not, but when you have a field named after you, I have to think you are one of the best coaches in the conference.

I have all the respect in the world for Bobby Bowden. Personally, the guy is a sweetheart. Resume, what he's done is close to untouchable. But let's fact it, he's only staying in the game in an attempt to win the Pine Box Derby with JoePa. He's just a figurehead now and for me, he's just not adding anything to FSU any longer.

Sure, it's sad when you actually have to write a rule specifically stating 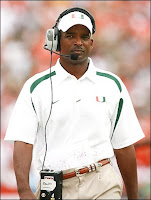 "no guns" for your players, but Shannon had an uphill battle he had to win. He replaced Larry Coker (who gets my vote as the most aptly named coach EVER. EV-ER!!!), who didn't care what the players did as long as they looked good on the field. Erickson and Jimmy Johnson weren't exactly disciplinarians, either. He's come into Miami and has turned the program around. Plus, he was smart enough to know he wasn't smart enough and brought in Mark Whipple who I believe is a great fit there. I understand the jury is still out on Shannon, but as much as I hate Miami, I do like the coach.

Randy Shannon, although great assistant, and player at the U. The jury is still out on his HC abilities in my book.
On that note, I am going to go with another ex Defensive Coordinator, and go with Boston College's own Spaz. He leads with his own dry humor.. which leaves the media wondering if he is serious or joking most of the time., and which can be hard for some of the ultra faithful to even follow. But on the field he is all about results, and hopefully he continues to grow this even more at his tenure at BC.

I agree with you Wesley, the jury is still out on Spaz. Obviously, I want him to do well. I want to take him first overall....but so far it's been a learning process, which is what you expect from any new head coach.

I'm taking Dabo Swinney here because not only has he

successfully done, for the most part, what Spaz is trying to do--but he's got the fan base ridiculously fired up as well. Some might say that the Clemson fans are an easy group to get fired up, but he's put a charge into the program and was someone that was much talked about going elsewhere. I know this is a little early for him, but I almost look at it as a stock. If it's Dabo stock, I'm buying as of now.

8W) Tom O'Brien
I just can't understand why "That Boy"
even belongs up here, outside of the possibility that you are banking that ranking based upon success against Boston College? But an overall ranking of 6-4 , really doesn't get ohh's and ahh's out of me.
I guess I better be quiet.. I am sure that my choice here isn't going to grab me any extra fans. But hear me out.. we are talking game day preformance, nothing else. During his BC years , he had a record of 75-45, and keep in mind that Boston College had gone through some turbulant changes before Tom O'Brien. TOB, appears to be making some progress at NC State, and I imagine that they will be a solid team very soon.

TOB? Really? Listen, I respect what he did at BC...but giving me crap about taking Swinney when TOB actually has a LOSING RECORD at NCSU is laughable. Sorry, the only thing the guy is good at is taking programs in the dirt back to mediocrity, and making excuses on why it's either A) not happening fast enough, or B) not winning enough.

Well, that and his ability to charm both LNH and Dana Bible Patriot Golfer.

but right now--frankly, there's not a whole hell of a lot left at the bottom of the ACC coaching pool. SEC fans boast about how great of a conference the SEC is--yet the ACC has more first round picks, and more overall picks in the last ten years. So talent-wise--clearly, they are wrong. Where they're right is coaching.

Butch has never blown me away as a fantastic game day coach, but frankly, he's just better than the options left with Fridge, Al Groan, and Cutcliffe. Cutcliffe might be decent, but so far the early returns are crappy. Fridge was good once, but no coach should be at his school for as long as he's been and have a team that's THIS f'in bad. I don't need to tell you why Al Groan is bad. I still have no idea how he has a job. There's no other profession outside of government work where you can suck with such ferocity and remain employed. 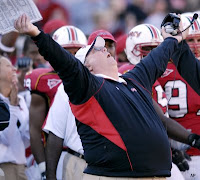 Butch is a good call this late in the Draft, and honestly I wish I had him to pick instead of mine.
On my pick, well since there is little left on the list to choose from.. I am going to go with the "FRIDGE"
Fridge has done well at Maryland , but probably better at the start of his career there in 2001 , rather than lately.
But with a total record of 65-38 at Maryland, that's really not too bad at all.