The 8/21 Draft: What Defensive Player would you like to have your back in a street fight 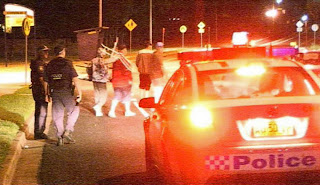 That's right... Its street fight time.. so break out the butterfly knives, blackjacks, brass knuckles, crossbows and neck chains.. cause this is a no holds barred event. This is a Sharks vs Jets, an East Coast vs West coast type of brawl where we are each going to choose 5 Defensive players on the current roster and up to five years back to have our back.. you tell us who would win.


Wesley's up first again...who you going with to lead your gang? 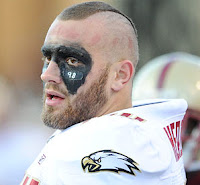 Look at this face.. the fear will impose its will upon any opponent on turf or in a dome, or on the corner of 5th and main. Also, word on the street is he is pretty wicked with the knum chucks too.

Ron Brace. Not only was Al a pretty big dude, but he was strong as all get out and had a nasty streak to him. Plus, we've got some pretty convincing footage that he'll back you up when someone tries to play dirty (the 1:20 mark).

Good Pick Mike... That clip pisses me off everytime I see it ..
But when I think "Got my back" im not just thinking size and strength, Im hoping for some super powers in there as well.

Did you know Football players could fly? Neither did Chris Turner until it was too late.. some things are just best learned first hand.

knows exactly what I'm talking about. I want to say the first time was his Frosh year when he was on the sidelines but just stood out like sore thumb...the guy just looks bad ass, there's not any other way to put it. I sure as hell wouldn't mess with the guy...or anyone he knows. 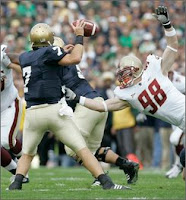 According to Spaz; after his surgery his head can go ALL THE WAY AROUND !
Do you know how much of a mental advantage that will give you in a fight if you just start spinning your head around? On top of that Alex has always the type of player that goes out with something to prove.

Yeah, he's a true freshman right now, but at 6-6, 300lbs and nary an ounce of body fat, I'd be just fine having Dillon watch my back. Time will only tell how much bigger and stronger he'll get, but I think he's a good choice at 6, possibly a great value / sleeper. 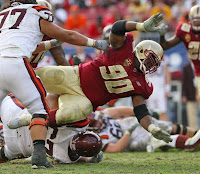 Good pick with Quinn.. he definitely has rookie credit. But I am looking at more of the hole he is trying to fill.. a 330lb 1st round draft pick type of hole.

I am surprised I can get Busari this late in the draft... BJ, AKA the human shovel, is a great first line of defense for any street brawl. As a one man wrecking crew.. no weapons will be needed for this man.

Excellent selection with BJ, Wesley. I was afraid if I added BJ to the crew that already included Al Washington and myself there wouldn't be enough room to walk down said dark 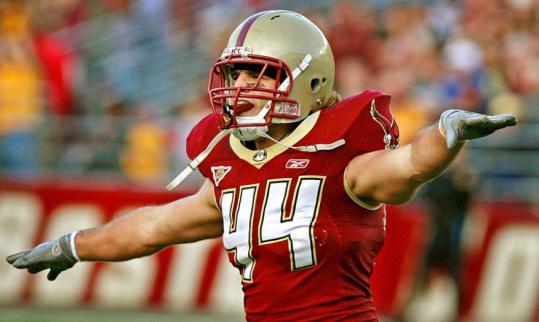 Sure, Jamie's not the biggest guy around, but hear me out. I need someone who is going to sacrifice themselves for me in this situation. I need someone how doesn't have a problem getting dirty and putting themselves out there. Certainly Jamie is no stranger to getting dirty and we all know he'll throw his body around as if he only had one day left to use it. He's a scrapper and a great value pick at this point in the draft.

Standing a mere twenty stories tall, and lightning quick.. no one is safe with Kiwi around.. he once blocked a field goal while standing on the sidelines... if coverage is your game.. this guy is your man. Kiwi is actually one of my all-time favorite BC players, Wesley. As much as I loves me some Kiwi, he's just too nice of a guy to make this list.

I'm going with the Detroit Lions' newest player, RoFran. Not only was RoFran a physically imposing character, he also spawned the hit song "RoFran: Don't Touch Me". If the other bad-ass dudes on the defense are afraid of him, that's all the reason I need.