9/7 Draft: Plays of the game vs. Weber State 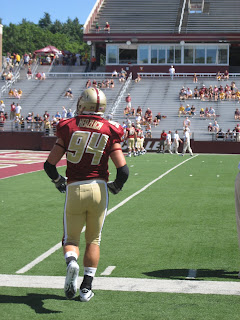 We know the ultimate play of the game was getting Mark Herzlich back on the field, and couldn’t discount that even if we tried, but here are the plays that happened on Saturday that led the Eagles to victory.

Gause really made up for his couple missed coverages by being aware and grabbing this errant tipped ball. He also showed good speed to get to the end zone. And this TD was without question the nail on the coffin.

When Colin Larmond went down, there was a lot of concern over who would be the go-to-guy for the Eagles. Well, it didn’t take long to see who it was that was going to step up—Red Shirt Freshman Jonathan Coleman looked great all game and his first catch and run set the tone that showed Weber State that they would have to respect the passing threat of BC, not just stack the box.

This is kind of tounge in cheek , although he showed great pursuit, it was our only sack. He showed some speed and was able to wrap up well. But of the D line he is one of the guys that has been out there most consistently. I am hoping to see improvement on the D Line throughout the year.

4M) Tackle on the play: Luke Keuchly (fumble recovery, too!)

It was assumed and hoped that Herzy and Keeks would play well together, but you 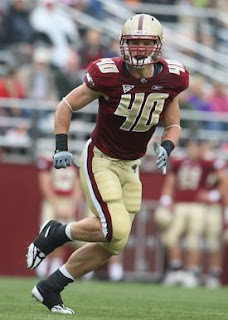 don’t ever really know until you get on the field. Not only did Keeks show up in grand fashion on the stats sheet, it became a running joke for Wesley and I as we patrolled the sidelines. It seemed as if the PA announcer would start out by saying “Luke Keuchly on the tackle”, then try to search who else was there. His nose for the ball carrier also lead to him picking up the fumble caused by the jarring hit of Conor O’Neal, enabling the Eagles to grab possession of the ball and turn it into another opportunity for points.

It’ s always nice to see the RB added in the passing game. Marsco saw a wide open Phifer running down the sideline and was able to hit him in stride to give Phifer his first Collegiate Touchdown.

If I had to give out a player of the day award, I actually think it would go to Momah (or Keeks). I thought he played great iron man football being arguably our best pass-rushing D-lineman when he had the opportunity while also playing a big role in the passing game. His TD grab was a really nice one mainly based on his body positioning. While he jumped up to get it, he really didn’t have to. He had walled off the defender and made himself a giant target in the endzone for Shinskie. Great body control and excellent execution. If he can continue to use his body in that way, he’s going to be awful hard to stop vs. just about any other opponent BC faces this year. 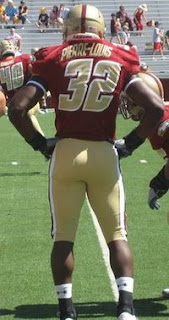 This guy is going to be fun to watch over the next few years. When I saw him warming up , it truly was hard to believe that he was only a freshman, as he was built like a senior. He showed great talent during the game, but to me his best play was on special teams when he was able to really blow up his man.

While he wasn’t asked to do much, he did it well….aside from the kickoff that bounced out of bounds. But seriously, we have a kid here who clearly can kick the ball and made extra points non-eventful which is exactly what you want. His one field goal was a no-doubter and it appears BC has finally, after long last, found a kicker who can hit kicks from outside the red zone.

I agree Mike, kicking is going to be a different animal for us , in a good way

We all knew that with the inexperience at WR, the TEs would see a larger role.. Well it didn’t take long into the game to see that take flight.. after adjustments had been made by Dave Shinskie, there was no doubt that he zoned in on Pantale, and had a good toss to him inside of the 5 and Pantale took it the rest of the way with a couple steps and a dive.

Unfortunately for the Eagles, near the end of the game there seemed to be a bit of malaise on the end of the BC bench. The game was all but decided, and sloppy play ensued including a careless fumble by Andre Johnson in trash time. To Weber State's credit, their second string O was still trying hard and went for it on 4th down.

Now, they got the first down at the two, but man oh man did they pay for it. A Wildcat crossed deep over the middle and caught the ball, but just as he reeled in the ball Noel popped him with easily the most audible hit of the game. The WR instantly stopped in his tracks and likely wanted to know what planet he was on. Again, to his credit he held on to the ball but it made me smile knowing that there's a hard hitting safety waiting in the wings for a chance to play...