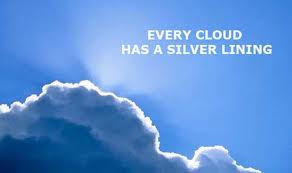 Sure, Saturday's loss to UCF was demoralizing on many levels, and as with all game losses, Wesley and I were forced to write yet another "worst of the worst" post recently.

But you know what? There's always a silver lining. It can be tough to find sometimes, but if you squint hard enough and skew your view, you just might be able to find the good parts of the weekend.

1W) Got to go to Disney
You know , Disney isn't just for the kids anymore, Iactually had a 12 hour day full of rides, decent food, and good times with friends,Orlando has a good thing going with that Disney thing. 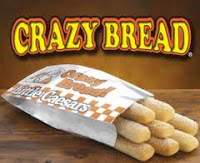 For those in attendance, you know that the announcer came on the PA and let everyone know when the score was 16-3 that if UCF got to 21 points, there would be free Crazy Bread offered to all those in attendance at their local Little Caesars pizzeria. When my wife called to see how the game was going, I said “WE WON!!....crazy bread”. It felt better than saying we got rolled 30-3.
3W) Max Ricci played very well for a true frosh
I think Ricci caught a lot of crap even before he committed to the Eagles, well he showed that he belonged on the field when he was on it. He constantly had a greatpush on the Offensive line, and I would really like to see him lined up next to Ramsey, as I feel like it would be our two best Tackles on the field

4W) I didn’t lose my wallet

I wasn’t able to key-in on Ricci as much as you were, but I have to say “I called it!”

http://bcdraft.blogspot.com/2011/02/draft-2-22-draft-new-bc-commitments.html. Max’s early performance is all the more impressive given that he and everyone else was under the impression he would be red-shirtin
g until he was called into action vs. Northwestern unexpectedly. I remember you commenting that he was one of the few DT’s who was actually getting a genuinepush up the middle.

For number four here, I have to take the face that I didn’t lose my wallet. I know, bizarre…but I thought I had, and this made the end of the day that much worse. Thankfully my buddy JC found it and saved me from trying to scavenge the bleachers and campus of Central Florida Sunday morning before my flight back to Atlanta. Let me also just say that as a newly married man I can empathize with all of you who have been telling me this sort of thing for years. While I was bummed about “losing” it, all I could think of was the hard time (and rightfully so) my wife would give me for losing my wallet after tailgating for 8 hours and traveling to an away football game. Thankfully, that conversation never had to happen. Easy top five pick there for me. 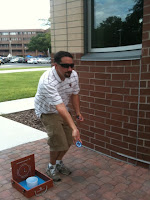 5W) Got a suntan and didn’t burn
You know if you follow @BCMike22 on twitter, we had a lot of fun playing the ring toss game at UCF, well we actually spent about 12 hours outside for the game. Well I got a nice tan , no burn,.. Good stuff

Agreed, Wesley. That Central Florida sun was BEAMING early on. I live in Atlanta and I know you live in Alabama…but let me say it’s just noticeably stronger in Orlando. Thankfully we did find some shade to chuck the pigskin around in and knock back some brewkowskis.

Nate connected on 100% of his tries on the day. Mind you, that was one field goal and the entirety of our scoring for the whole 60 minutes of football, but it was a nice kick from 43 yards out. Can’t say Nate didn’t do his job Saturday—one of the few who improved (if not the only one who improved) from last week’s loss to Northwestern.
7W) Met some cool UCF fans tailgating

Let me just start with the UCF fans do it right, the tailgating is to a Tee, huge and honestlybetter than Alabama , Auburn, Florida, Clemson ,etc BY FAR!! Yes Write that down. We setup camp on the outskirts of the busiesttailgating, ( as we went the free route)
and were right next to a guy that had two grills, a deep fryer, a broiler and a gas stove.. He made his own wings, hot, teriyaki etc, was very impressed, very friendly folks as well.

I have to say I was on “alert” for bad UCF fans given what I had read, particularly those near “Memory Mall”. While we were heckled a little before the game, by a 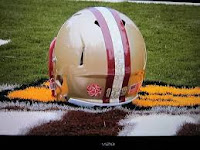 nd large the UCF folks kept to the themselves and were nice when we approached them. I know one of them was even kind enough to allow us to use their grill to heat up some dip—so some credit definitely goes there.
As far as the UCF fans IN the game, I don’t really give them high or low marks. Some kept to themselves, others clearly were trying to start fights with our fans, and still others (sitting in the BC section) would just constantly chirp at our fans for no good reason. There were a couple shots leaving the stadium and on the way to the car, but all in all no where near as bad as I had been prepared to deal with, and still the majority supported the Welles tribute which earns very high market in my book.

Speaking of Welles, my 4th pick 8th overall here is a steal. While the game greatly diminished the overall spirit of the trip, one could not help but be moved by theamazing tribute the UCF & BC fans did for Welles on Saturday. There were literally red bandanas everywhere. My hat (and bandana) is off to the UCF & BC fans who participated, and for both schools getting behind the cause on such short notice. (insert pics of bandanas as well as pic of the Crowther girls here)

The BC travel group was actually pretty strong! I would actually say they about 2-3k were louder than the non student crowd can be at Alumni. They stood up when they should, and stomped on the metal bleachers with glee.. The travel crowd was definitely into the game.

10M) We’re still in the hunt for the Orange Bowl

I know, I know…but factually, it’s true. As a BC fan you should know there are on

ly two ways we ever play in a BCS bowl game. One, we go undefeated while no other team in FBS does. The second is if we win the ACC Championship game, we go to the Orange Bowl. While it’s completely true that no team in all of the NCAA has a worse record than our Eagles currently do, the folks at the Discover Orange Bowl don’t care (well, I’m sure they do, but contractually they can’t) as long as we win the ACC, which means only ACC games count.