Draft 12/9: Reasons the Band should go to San Francisco 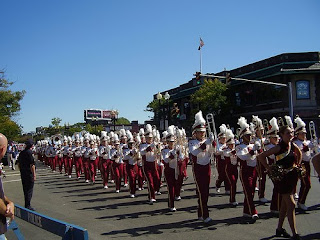 With the Emerald Bowl upon us, and all the hype coming for the matchup with USC. We feel that the Band should Travel as well, at least in fractional form, and here are the reasons why.

If you really want to be big time, you gotta act it.
Not sending the band is bad, but sending a High School band in your place is just worse. Sometimes being Big time has a cost, a cost which I feel we should pay.

2M)We get a bad rap for not traveling to games as it is, not sending a band helps reinforce that (mis?)perception

Many fans believe that the main reason why BC slips every year in the bowl selection process is that BC doesn't "travel well". Well, if the school itself doesn't even send the band, what message is that sending?

4M)We don’t make it to the West Coast very often, we have to put our best foot forward

You never get a second chance to make a first impression. While it's true that BC has a good amount of Alums over on the Left Coast, many people there just know of BC as a school from FAR away in New England. They may have certain preconcieved perceptions of BC football and we have to do our best to show them all that we ARE big time and DO care about our football. It's not like we're talking about going back to Jacksonville or even Nashvegas here.

5W)Members of the band state that they would love to go.
Both Boston and Los Angeles papers have reported that there are several people on the band that would love to attend this, even with the date. Other than the cost, why not let them?

6M) Our fans need to make noise to be heard

BC will undoubtedly be in the minority in San Fran vs. USC. We will have to be extra loud just to be heard. Sure, there will be a high school band out there playing "for Boston", but will they know all of the rest of the tunes that our band does to get the BC faithful up and cheering? I would assume not....

7W)Don't want to hear fight on over n over

Let me prelude with, I really like the song fight on. It's top ten of fightsongs in my book. But For Boston is number 1. So I would prefer to not to hear Fight on by USC's band.. over and over and over..

8M) Rewards the kids who played through the Northeastern game…not every game is a treat, this one is.

It's not like these kids were bragging when they went to Detroit a couple years ago. Nashville's not half bad, but going to San Fran is a real treat (rice-a-roni, as Wesley pointed out, is the REAL SF treat). These kids hope and wish and pray for a chance to go someplace really neat like this and it's a bummer having to let them down. They played during the rain in Buffalo last year and the unpleasant Northeastern game, let's reward them with a trip out to the West Coast!

9W)Because even yukon has been sending their travel band

It's never good when you are compared to Yukon, but BC didn't send a travel band to Notre Dame, and Yukon did..
I understand not sending them to every game, but I believe certain events you should.. this just happens to be one of those events... So here's to hoping that this changes!

10M)Showing the team you’re committed to supporting them

Some people might say that the players don't notice or don't care. I am not sure I buy that at all. Making sure that the band travels with the team to help the crowd support the team sends the message that you're committed to helping to do ANYTHING that you can to help our boys pull out the win. Not doing everything we can just sends the wrong message to a team that scrapped hard for 8 wins this year.

Wesley drafted: Big time, fans deserve it, Band members WANT to go, too much FIGHT ON, even UCan't does it
BCMike drafted: dispel the myth, best foot forward on west coast, need to make noise, reward the kids, show commitment