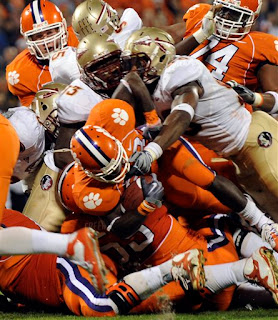 EVERYTHING MUST GO! The QB that I had tabbed

earlier in the week as the best QB in the ACC looked far from it. Now, I don't know the extent of his rib injuries and how much that hindered his play; but four INT's is not going to allow you to beat many teams. The fact that he entered the game with three on the year and exited with seven speaks volumes. Big players make big plays in big games. Ponder failed.

Death Valley is a pretty imposing place to play, believe me.. it is.
But Florida State really just made it look all too good. It seems like the stadium/
fans really got into ponders head, let alone , the O line, the secondary, Heck even the playcalling.


3M) Allowing CJ Spiller to run wild on the ground

Much of the focus was, appropriately, on stopping CJ 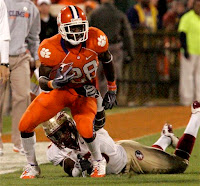 Spiller entering the game. They did a nice job of limiting his return opportunities and bottling him up in the kick/punt return game, but allowed CJ to run all over them.

Spiller had a career-high 165 yards, most of which seemingly came directly after a missed FSU arm tackle. Spiller gashed FSU on a 45 yard tote at one point where he zipped through a huge hole and got to the edge faster than the FSU defenders did. Remarkably poor showing by the front four of FSU.

Mickey has been at Florida State for over 25 years... and I have to say this is the worst defense I have ever seen there... ever.
The biggest problem, is a core problem.. inability to tackle. I am not sure why, but Florida State's defense , seems to like to hit players, but never wrap up... causing would be short gains
into huge ones. Maybe it is Mickey's time to go..

5M) Bringing pressure on Parker from the sides, not up the middle

The games I've watched with Parker, he gets happy feet

and craps himself a little if you blitz him directly up the middle, as he's got good pocket presence but not great mobility. For reasons unknown, FSU consistently tried to pressure Parker with an edge rush. To Parker's credit, he consistently just moved up in the pocket with the blitzes came, often having ample time to allow for routes to develop and found many a men open. Why the pressure came from the edge and not up the middle was baffling. 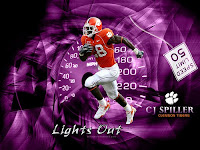 We warned you Florida State!! Didn't we?? We said Don't let Spiller Catch any passes, And what did you do? You let him... and what happened? It went to the house!
Spiller has great speed, vision, you can't let him get the ball on the move. Poor
move FSU.

7M) Greg Reid is being misused

There's no shortage of electric players in college 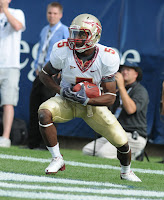 football, and some of them are freshman...such as Oregon's JaMichael James, BC's Luke Kuechly...and make no mistake about it, FSU's Greg Reid.

I understand they recruited the kid to play CB, and maybe he'll be a fantastic one some day...but when you see this guy with the ball in his hands in the open field, it's apparent that he needs to be lining up on the offensive side of the ball. Maybe only use him 10 plays a game on offense, but get this kid the ball in space. FSU's best scoring threat, IMO, is playing defense. 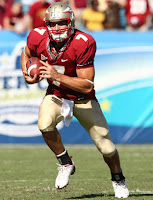 Bad went to worse, when Ponder threw an interception and then tried to halfway redeem himself by making the tackle himself.. Which was a valiant attempt, but ends up hurting FSU more down the road, as Ponder will miss the next weeks game.
As Florida State typically lives and dies by the arm of Ponder, this will definitely hurt the Seminoles, as depth is not really existant @ QB

No one is going to argue that FSU's not having a down year, or that they have had good couple close games go against them at the wire. 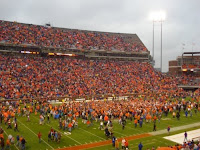 That being said, Clemson fans (who we regularly give love to on this blog) had no reason rushing the field after the win. Yes, it's FSU...but it didn't mean anything. While the Tigers still control their own destiny, the story is far from over (the betting public agrees, as Clemson is a measly 4.5 point favorite at Raleigh this weekend), and the LAST thing your team needs is to overlook the rest of your season. There's a time for partying and congratulations on a great season, or perhaps over a long-time rival or huge upset of a top 10 team. Saturday night fell into none of these categories.

What happened to the atheletes that FSU used to have?

The secondary used to be a point of strength, now... they leave a lot to be desired.
When you make Kyle Parker look that good.. tossing four Touchdowns...
Something is seriously wrong!