As we head in to South Bend this week, we thought we would enlist the help of some of BC's best and brightest. Since that's clearly not us, we put up a white flag and waited for help...who came?

None other than the Big-Time Blogger Brian, from BCI.

I also get ten points for alliteration. 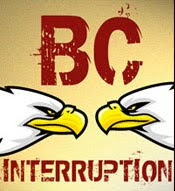 For more on BCI, make sure to click their NEW logo above. I liked their old logo better...(I designed that one!).

The shortened keys to the game are below, but for the FULL podcast, including tossing pot shots at Claussen, LNH, and more...you'll have to suffer through the podcast below.

Keys to the Game vs. Notre Dame

BC Interruption1) Pressure Jimmy Clausen - Keeping Clausen uncomfortable, and not able to make the easy passes, and having constant pressure on him.

BC Draft2) Swarm Golden Tate - Known as Clausen's favorite target, BC will need to force Jimmy to look elsewhere for help downfield

BCI3) Montel Maintainin' - After Montel's great game against NCST, if he can keep up the momentum against a Notre Dame Defense , that isn't really known for its Run stop.

BCD4) Give Shinskie Time - Giving Shinskie time in the pocket. Shinskie makes a lot better decisions when he has time , and can find the open reciever

BCI5) Not having injuries - come out of the game unscathed, because there are still a lot of important games on the line, to get BC to Tampa.

BCD6) Shaking the Road Jitters - BC hasn't been on fire on the road, now is the time to shake that , and prove that they are not just a home team

BCD8) Get up early, take the ND crowd out of it - ND fans will be up and ready for this game, take them out of the game with a quick score

BCI9) Win Turnover Battle - BC has had success when winning the turnover battle this year. If they can win this battle vs. The Fraudulent French, it will be key.

BCD10) Light up Rudolf the red-nosed TE - Kyle Rudolph is playing well at TE, and has proven to be Clausen's check down man.