BCDraft: First of all, thank you very much for taking the time to talk to BCMike and I of BCDraft.com, we greatly appreciate it! You were recently named the Assistant DL and ST coach at BC, can you tell us how all of the staff is working together, and a day in the life for you in this new role. Also, how is our DL looking?

Al Washington: Under the leadership of Coach Spaz, as a staff we are all focused on putting together a season that reflects the rich tradition we have here of being tough, disciplined, competitive and relentless on the field. That is the BC way I know and believe it to be, if we can do that our record will take care of itself. As a former student athlete here at Boston College I find it both exciting and humbling to return as a coach, I am eager to roll up my sleeves and get to it, this fall. As a defensive line we are young and talented looking forward to re-establishing a reputation of dominance in this conference. The boys have maximized their opportunities this off-season and are taking the first steps as we look forward to having a strong preseason camp.
BCD: You have had a lot of success on the recruiting trail, what do you think is an important message to share with recruits when talking about BC?

AW: The message conveyed to the young men is simple. We educate them of the rich tradition here at BC as well as the multiple opportunities that will be presented to them as student athletes, both on the field and off. I truly believe that Boston College offers the total package. As a native of Ohio I can tell you that choosing Boston College was one of the best decisions I have ever made in terms of my development as a player, professional and person.

BCD: The Original 92 Dream Team plays the current USA Basketball team, who wins, and why?
AW: 92, too much character and mental toughness, period.

BCD: How has College Football changed since you played?
AW: Since 06’, a lot more uniform options per team I guess…man, how old do you guys think I am? Haha!

BCD: The new field looks great, for those that aren't there at BC, can you tell us a bit about the improvements?
AW: BC is taking the appropriate steps in creating a high caliber environment. I personally love it and feel the fans will too.

BCD: Most BC diehards remember you as a dominating DT that came to Kiwi's aid when Brad Butler took a cheap shot at Mathias' injured knee. Can you take us back to that day and walk us through what you saw, thought, and did?
AW: Honestly I didn’t do too much thinking that particular moment, haha. That’s just how it was, that was 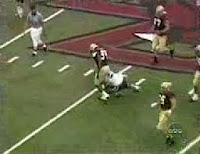 the culture we practiced in everyday, it was a tough mindset. We supported each other and were not going to be pushed around. I never had any ill feelings towards Brad Butler, I wasn’t trying to be a hero. It was our first year in the ACC and we just refused to allow any team to think that they could push us around.
BCD: It seems to those of us immersed in Social Media that you are the first coach/recruiting coach who gets excited about recruiting and the kids you are talking to. How important do you believe it to be in this new era of communications for BC to be involved in multiple social mediums? What is your strategy when it comes to communicating on these different platforms?
AW: I believe it is incredibly important to be involved with the young men and today that is the arena to facilitate this involvement most of the time. I believe the best schools in the country have a presence in social media and I know as time goes more and more programs will have to as well in order to stay ahead of the curve. My approach is to highlight everything positive about the city of Boston, the education department, the facilities, the prestige, hell I even focus on how fresh the air is here, haha . But the majority of what I focus on is the great potential BC holds for a young man’s future both on and off the field. I think that there is a lot to be excited about here.

BCD: WAWG....tell me about "We all we got". Where did that come from, and what does it mean to you?AW: "We all we got” represents the belief that no one is capable of supporting us like the way that we can support each other. I got it from a movie a long time ago and it’s how I live my life. Whether someone believes you can or can’t reach your goal is not important. What matters is what we believe. In life when you make mistakes or come up short, people tend to count you out prematurely. Last season’s record does not define this season of BC football or the direction we are headed. That saying represents a movement, if you will, of us going in the right direction, but first it starts with us.
BCD: What players should we look out for on the DL this year that we don't already really know about and expect a lot from...who are some "sleepers" who might surprise the casual fan?

AW: This group is so competitive I couldn’t point out just a few. This camp is wide open and the fans will have a lot to look forward to this Fall.

BCD: As fans, we were very excited to see you and Richie Gunns (Rich Gunnell) brought back to the BC family. Is there a push to bring more BC stars and more BC family members back into the fold?

AW: I think so. I know that I was excited to join and to see Rich back as well. We are a family here at BC and time will never change that.
BCD: Last but not least, even the craziest of the crazy BC fans left last season feeling a bit heartbroken at how far the program has fallen. It seemed like only a handful of years ago we were ranked #2 , playing for conference championships and on off years winning another bowl game. Now that we have suffered our first losing season since '98 and haven't won a bowl game since Matt Ryan beat Michigan State in 2007, what words of encouragement can you give the masses? What, realistically, should BC fans expect out of this team? What sort of realistic goals is this team capable of achieving?

AW: What I would tell the fans to focus on is to remember how we finished the year last season. The kids made their mind up and decided that they want to WIN and proved this off season that they are willing to work for it. What they should expect is a tough, disciplined, competitive and relentless team on the field. The Sky is the limit. Right now we have to focus on having a great first snap on Saturday. After we are able to do that then we need to focus on play 2, then 3 and so on. Do that enough times and I believe good things will happen.

A BIG BCDraft.com thank you to Al Washington for taking the time to chat with us today.  #WeAreBC #WAWG
Posted by BCMike at 8/29/2012