Draft 3-16: Reasons to be excited about the future of the BC Men's Basketball team 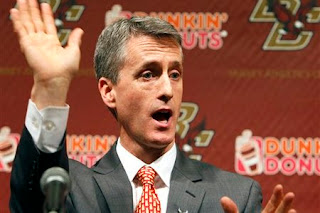 Although 2012 is over, and we don’t predict to be a preseason number 1 in 2013, there are some reasons to be excited about the future of the program.
So here we go.

improvement . Most schools give freshman sub 20 mins a game with most of

ours playing tremendously more I am excited about the experience they

While Football has the ³Curse of the four star² athelete/recruit, BC has

enjoyed phenomenal success when we¹ve picked up Gatorade Players of the

Year from a given state. Will Blackmon (football) was one in Rhode

Island, ReggieJackson was one in Colorado, and Ryan Anderson joins the

eye-popping impressive list of GPOY from the Great State of

Ryan is a bit of a ³tweener², which is why many thought he would have not

been recruited as heavily as former winners of that award. As the year

progressed, so did Ryan‹and the future is oh so bright.

BCMike, I Agree on Ryan I do think he will be solid going forward

On my third draft pick I am going with the coach, even though wewere the

number 12 seed in the ACC tournament this coach is no cigar stone Indian,

contagious, you get pumped even when down 20. I have full confidence that

100% agreed on Cap¹n D. It¹s not often a coach can come short of double

digit wins, finish indead last place and still have the buy-in of the

students, athletes, alums, and media. He¹s done it, however. At

least..thus far. He¹ll have to put up much better wins/losses numbers

next year. This year everyone knew would be tough.

I don¹t know if anyone else sees this comparison, but Lonnie Jackson has

some Jared Dudley in him. On more than one occasion Jackson got hot from

beyond the arc and just took over games. He¹s still way too streaky, but

game‹that kind of thing makes you very optimistic about the future. When

outside of Tyrese Rice.

As mentioned before we have a very young team, if I said that 100 times

But we have a team that essentially never played with each other, and

never played for Donahue. Not just one or two, the majority of the

As the team continues to play together, there will be a tremendous amount

It¹s not terribly often that you hear ³Athletic² paired with ³seven

footer², but that¹s exactly what Dennis Clifford is. He was a little

his game and had some really nice games this year. I think as he puts on

a little weight and gets more comfortable with his offensive game, teams

and fans are going to be saying two years from now ³Sheesh! Would this

guy graduate already?!?². I think he could wind up being in elite BC

company when his career is over if he continues to work his craft.

BCMike , couldn¹t agree more on Clifford, I agree he has a bright future

as an Eagle. That was actually you stealing my number 6 draft choice.

On my 7th round draft pick, I am going with the Donahue Disciples. This

showing passion for the coach/ program and future.

as a fan. If he can be a consistent offensive weapon for this team

instead of his super hot pretty cold swings, it would be an absolute

game-changer with the growth of Clifford and Caudill.

join the Eagles in the next season, it feels like the Eagles Basketball

case of Mono derailed an earlier promising season. A year of recovery