You will have to once again pardon our time between posts, this whole "job" thing keeps on rearing it's ugly head.

This week, we look at the breakout players in the next season. Who do you think had the best draft? BCMike or Wesley? Who did we miss? Vote and leave your comments below!!

Sure, Pantale has had a good career thus far in Chestnut Hill, but look for 2011 to be a special year. From everything we have heard, the Rogers offense is going to look to exploit this talented position for the Eagles, and no one more up to the task than the polished Mr. Pantale.

2W) Chase Rettig, QB
Mike, its going to be hard to argue with Pantale being the first pick. Pantale is a great TE, although he didn't get to play this Spring, he should definitely still be a factor this fall. And with the new offense showcasing the TE a lot more, it really should be a nobrainer, heck even in NCAA 2010, I got a Heisman for Pantale haha.

With my first choice Im going with Rettig, the guy tossing the ball to Pantale. Chase did decent in 2010 being a true freshman, progressed as the season went on and after a year under the belt he should show great strides with a new OC. He already
has done better in the Spring based on what I saw, and he should continue to get even better.

Good call with Chase there Wesley--I do think we'll see improvements from Chase (particularly after our interview (part 1 and part 2)), but I guess I already expected big things from Chase---Pantale will have a big chance to shine, as well will another player, Mr....

KPL had a solid year last season and performed more than admirably as a freshman. 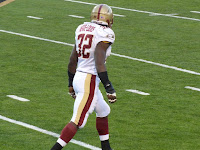 This year I expect two things: 1) Last year KPL largely got by on the god-given and personally hard worked-on athletic talent (as just about all Frosh do), but being around Keeks for a year and playing around him will make him more cerebral 2) While Keeks flew under the radar inexpicably in 2010-11, he most assuradly won't in 2011-12. DC's will plan for him and put resources his way to stop him; which will in turn open up opportunities for KPL.

So far you are batting 1000 Mike, I totally agree with both of your picks. I guess on this draft I am showing a bit of my Kenny Rogers side and being the Gambler.. 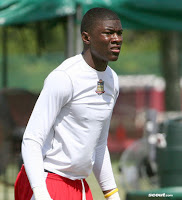 On this pick I am going with ALJ.. Although he has yet to play a collegiate game, he has the measurables, enrolled early, displayed skill in the Spring game, and I have heard nothing but positives, the proof in the pudding will come on Saturdays.. But I am calling it now, ALJ will display his skills this fall.

Interesting call on ALJ--I agree that there is no ceiling and that he could be a future star; but it's pretty rare for a true frosh (non "talent position" on offense) to break through.

I'm going with the best recruit landed in the country this year, Colin Larmond, Jr.
Sure, he's not a true freshman and not fresh out of high school but what Larmond is---he's filthy talented with a chip on his shoulder to show the world he's not just back, but an elite WR in his league--if not the country. Larmond is going to have a HUGE year.

BCMike, I am going to have to disagree on your number 5, you were going so strong, and I think you fell a bit on that one.. Although I think he will be successful in 2011, I think it will be later into the season, as I feel his recovery process is going to take longer than everyone is expecting, and then add getting back into the game.. Just my two cents.. And I hope that I am wrong.

I think a lot of people have been wondering what happens on the line with no Costanzo, and I think the quick answer is Wetz steps in and does a great job. 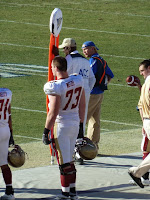 Now don’t get me wrong, we lost a first round draft pick with someone I think I could count how many games they played last year on one hand. But Wetz has shown leadership during the spring, and he definitely understands this is his time, and I think we will all breathe a sigh of relief when we see he anchor down that left side.

Funny you should say that about Colin Larmond, Jr., Wesley---because I'm in a similar boat with Wetz. I'm VERY much hoping that he can fill the shoes of Cazzy, but I think it will be a learning year for him adjusting to the blind side--but I hope I'm wrong, much like you do. 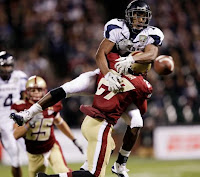 For #7, I'm taking Okechukwu Okoroha, Mr. "Hollywood", Mr. "O" himself. This season his full athletic ability will be on show and one more year of understanding Spaz' defense will be under him. He's undeniably one of the most athletic guys on the team and with some discipline under Spaz' system, he'll be a 1st or 2nd all ACC guy for sure. 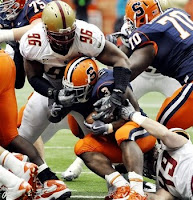 I am going to keep it simple on our DT , he just exploded physically last year, and showed great strength and speed… As a senior on the Dline he is going to create some NFL prospect Tapes in 2011.. And plus I like the way he just seems to play like he is totally pissed off.. That's exactly what I want in a DT.

Wesley, if Kaleb were to be the breakout player; I can' t even imagine how great of a season we would be having. He's having to replace big shoes (both physically and by play CT native Damik Scafe), and I would be excited by a zero drop off; but I don't believe Ramsey has the physical size to be a breakthrough player at DT; he is more of a rip and pursue player than a read and react player IMO---which I believe is important at DT---but again I hope I am wrong.

With my last pick in this week's draft, I will take Kasim Edebali. 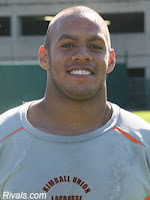 I think that from everything I have heard, he's very "Kiwi"-esque and while he was a player that was recruited out of this country, he has well adapted to the state-side ball play and has shown a propensity to be able to get to the QB. BC fans have bemoaned a lack of QB rush from the front four; I think "Eddie" is the answer.

10W) Luke "Keeks" Kuechly, MLB
Good call on Edebali, he definitely displayed the skill and talent, let alone the speed last year that made me think that he could definitely put on a nice display. 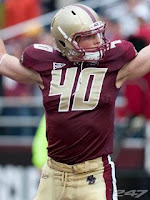 With number 10, I choose Kuechly, well I guess the rich get richer. Luke seriously got some attention in 2010, racking up 10+ tackles over and over and over, but watch for luke to try to display his QB sacking ability, his ability to cause a fumble, his tackles behind the line of scrimmage, last year he showed his ability to track down the ball and make a play, this year I expect to see him be a bit more dangerous to the other team
Recap:
BCMike: Pantale, KPL, Larmond, O, Edebali
Wesley: Rettig, ALJ, Wetz, Ramsey, Kuechly