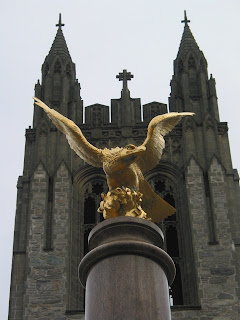 Finally, after waiting for eons for the Jay McGillis Memorial Spring Game to arrive, it finally happened. For those of us unable to make it to The Heights for the game, we were able to watch it on the 'net...albeit a little on the pixelated side. But hey--better than not being able to watch at all.

Here are the top ten things we walked away from the Spring Game with:

This time last year, we had nothing but questionable quarterbacks.This year, I breathed a sigh of relief when the ball is in the QB's hands. Although I feel it will be a tight race, It will be a good one. We are in a tremendously better position this year at quarterback.

2M) Marsco the front runner for the starting QB job

I felt like going in to the Spring Game that it was Dave Shinskie's job to lose. Most of us believe that "Uncle Dave" has all of the physical tools necessary, but needed to get much better at feeling the pocket, reading defenses, and reducing mistakes.

IMO, he looked exactly the same as he did vs. USC at the end of the year. Yes, I understand it's a small sample size and you don't want to judge a player by just one performance, but anyone who says they weren't disappointed in Shinskie's effort on Saturday is lying through their teeth. I think he opened the door to other competition.

He made smart reads and wasn't afraid to take chances downfield when they presented themselves. He looked more confident, more in command, and simply put--he looked comfortable. Now, his game experience isn't what Shinskie's is, and one might argue his ceiling may not be as high as either Rettig or Shinkskie--but I do believe that if the depth chart was filled out today, Mike Marscovetra would be the starter.

Mike, this is just where I feel we will disagree, although it goes without question that marscovetra had the best game on saturday let me say there is more to playingin the fall than the spring game. But as spectators thats about all we have to go on.

Max Holloway piled up four sacks. I didn't count that many, but we officially have an edge rush. Twice it was at the expense of Mike Goodman who didn't look good, man. Perhaps he should be moved to DT or G. I digress...

Holloway showed great speed but almost as important, great technique and leverage. He was able to dip the shoulder in at the right time to throw of the blocks of the tackles and TE's he was facing and by the time they had adjusted to his lower position, Holloway was by them and turning the corner. You still have to be concerned about his size and weight (much like Momah), as if a team runs right at either one of these two you don't really feel great about it; albeit Holloway to a much lesser extent.

Regardless, on third and long where our D-line gets to pin their ears back, I'm betting we're going to see a lot more sacks this year.

I don't recall Momah getting much pressure or sacks--the stats say he had two sacks, but I have to be honest--I don't remember them. The plays I concentrated on him he wasn't able to generate much of a rush, he played about a foot too high, but he was able to stretch out and swat down a handful of passes. He's next to impossible to pass over. This could lead to many deflections/interceptions.

The point here being he was surprisingly effective. Is that because our OL/TE's are not used to blocking someone as rangy and athletic as Momah, is it because Momah is just a pain to try to take on, or perhaps the OL is just rusty? I think the truth is somewhere in the middle of all of that; but I do also believe that Momah is going to be surprisingly disruptive if he gets an opportunity to see a good number of snaps this year.

A glimpse into the future.. Chase Rettig showed we have a lot to be excited for in the future. Although he is a bit raw, he could be the real deal.

He looks considerably bigger, which really helped when he had to step up in run support and open field tackling. One of the best things about Rodderick Rollins was that he played OUR scheme well--he didn't let guys get behind him, he could help out in run support, but most of all he made the open field tackle and didn't let a small catch turn in to a big gain. I liked what I saw from him yesterday.

What could have been a huge, and I mean huge ding in the running game of both Phifer and Deuce out. Javorski stepped up and looked great, especially for a walk-on rb. He looked like an oversized pinball out there, and had a great knack of keeping his legs moving after initial contact.

Although Harris' shoes are very hard to fill, I feel Javorski could be very serviceable in giving him a breather.

We knew the WR corps had to step up this year and take it upon themselves to fill the void left by BC legend Richie Gunns. Colin Larmond, Jr. was out of action and that meant a lot of question marks.
The big star WR on the day IMO was Ryan Lindsey who showed the ability to get open and make plays on short slants, crossing patterns, and even the deep ball--which resulted in the longest gain of the day on a pass from Marsco for 46 yards.

9W) Kicking game
I am going with the kicking team Being all backups and walk ons due to injuries of the first string.

I don’t think one field goal was missed, nor one punt was muffed.

10M) Spaz' willingness to let the QB's all play
The easy way out would be to play Shinskie for most of the game as he was the starter last year. By opening it up and letting all four kids get equal reps, more or less, he sent a signal loud and clear that the job was up for grabs.
It was exciting as BC fans to see Marsco mature, Rettig throw a couple lasers, and catch Bordner's nice touch on passes to the flat. Shinskie didn't have his best game, but there's still time to improve before the fall. I hope he takes the opportunity to further step up his game and we see improvement when the 2010-2011 season starts.